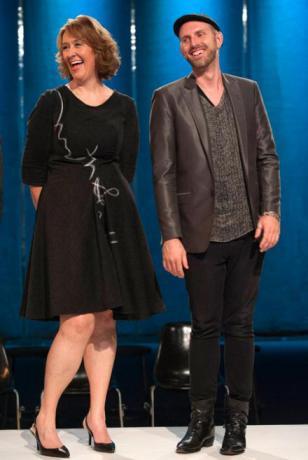 Tristen Seal smiles on the runway with designer Justin LeBlanc (photo from mylifetime.com)

If you didn't catch last week's episode of Project Runway, you missed a real treat. Church member Tristen Seal of Sachse, Texas, was one of eight "superfans" chosen to receive a head-to-toe makeover, including a custom-designed outfit from one of the Project Runway contestants and a new hairstyle courtesy of L'Oreal Paris. And what could have been a battle between modesty and fashion fought in front of millions of viewers instead became a beautiful example of how the two can tastefully and respectfully coexist.

Seal, who recently lost 130 pounds, was paired with designer Justin LeBlanc. When he asked her what she would like in an outfit, she immediately requested a knee-length dress with a modest neckline and sleeves, explaining, "I am Mormon, so modesty is important to me."

Many designers would have balked at such "limitations," or rolled their eyes at the very least, but LeBlanc respectfully obliged. But would the judges criticize his design for not being sexy or modern enough? No. In fact, the judges loved the dress. Zac Posen, a well-known designer who serves as a judge on Project Runway, praised LeBlanc. "I applaud you," he said. "You made a personal, beautiful black dress, and Tristen is glowing."

Kudos to designer Justin LeBlanc and the Project Runway judges for treating Tristen Seal's LDS standards with respect. And Kudos to Tristen Seal for having the courage to tell the world what those standards are.

Tristen Seal before and after her L'Oreal Paris hair and makeup makeover (photo from mylifetime.com)

Lifestyle Modesty Lifestyle Fashion HollywoodModesty,Lifestyle,Fashion,Hollywood,Lifestyle
Comments and feedback can be sent to feedback@ldsliving.com