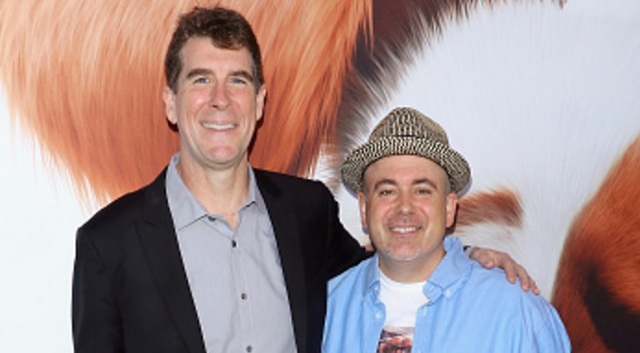 To creative masterminds like Cinco Paul and Ken Daurio, the release of another one of their Hollywood movies is starting to become a regular occurrence, with their latest creation, The Secret Lives of Pets, releasing this weekend.

With an impressive resume that includes over 10 films, these LDS screenwriters have had a hand in many animated movies you've probably seen.

Take, for instance, Horton Hears a Who!—an interpretation of Dr. Seuss's classic book. Though they had already written Bubble Boy and Santa Claus 2, Horton was their big break.

But getting the script approved wasn't the easiest task. At the time they were pitching the script, Cat in the Hat had just come out, and Dr. Seuss's wife, Audrey Geisel, was very unhappy with the sexual innuendoes and adult jokes in the movie. So when Chris Meledandri passed along Paul and Daurio's script, Geisel "was pleased to have two Mormon guys writing Horton Hears a Who!" Paul told Religion News Service. It seemed the two had a knack for capturing the family-friendly and fanciful fun of Seuss's works.

And Paul couldn't help but recognize the similarities the story had with the gospel.

"As Ken and I were writing the script, we saw a lot about faith," he told Religion News Service. "Hearing a voice that nobody else hears . . . It’s like Joseph Smith saying he knew he had seen a vision, even though nobody believed him. Those words of Joseph Smith actually did ring through our heads."

But this wasn't the only flick where their faith played an important role. Continuing on, Paul gives another example of when the two's faith influenced a popular movie, one whose sequel grossed nearly a billion dollars at the box office.

"Another example is Despicable Me, which was in many ways the most personal thing we’d ever done. I have three kids and Ken has three kids. To me there’s a lot of the gospel in there—maybe not specific to LDS teachings, but about the power of love to change a bad person into a good person. And just how every man has to abandon his villainy when he becomes a dad.

"There’s also a scene where the three girls are saying a prayer. We strongly wanted that scene in there. Religion is a very strong part of the lives of people, and it rarely gets any sort of real representation in films and TV."

“Our beliefs have definitely had an impact on our careers, most obviously in the types of projects we’ve chosen to work on,” Paul and Daurio told the Deseret News. “We want to write movies that are uplifting, optimistic and for everybody.”

It's a fitting philosophy to have for two friends who initially met at an LDS stake event. In 1997, Paul had written a script for his stake's Pioneer Day play. Daurio was an actor in the play and the two hit it off. During the performance, they decided it would be fun to write a script together.

Since that time, they've striven to make each movie they create meaningful. "We always want the movies to be about something, but we never want them to be preachy,” Daurio and Paul told the Deseret News. “We also never write them for anyone but ourselves. We just try to make each other laugh or feel something, and that may be one of the reasons our movies have had some success."

Lead image of Paul and Daurio at the premiere of The Secret Life of Pets. Image from Getty Images.