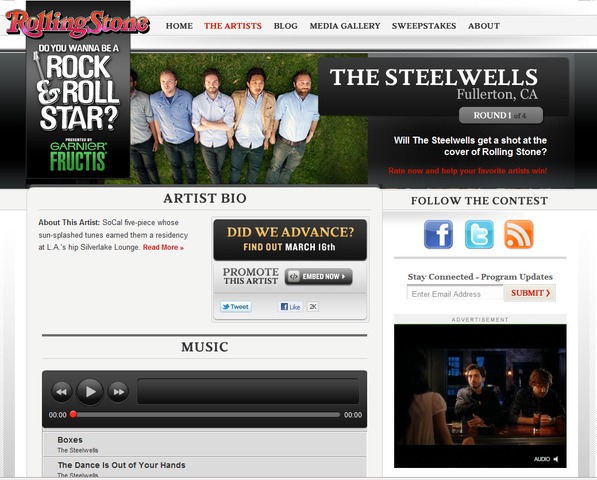 For the first time, the cover of Rolling Stone magazine will feature an unsigned band, and two of the bands in the running have LDS members. Fictionist, from Provo, Utah, and The Steelwells, from Fullerton, Calif., are among the 16 bands battling in Rolling Stone’s "Do You Wanna Be a Rock & Roll Star” contest. The winning band, determined by the quality and quantity of public ratings, receives a spot on the cover of August 16 Rolling Stone and a recording contract from Atlantic Records.

Last year, both local bands played for Atlantic Records, impressing the company with their honest and fresh folk/jazz/indie rock blend. The record company later recommended both five-man bands for the contest. Stuart Maxfield, lead singer of Fictionist since their 2008 debut, said, “A few months ago, we just got a call out of the blue asking if the contest was something we would be interested in. We decided it would be cool!”

Even if the bands do not win the coveted cover, the opportunity gives them great exposure and experience. “For me, I think the most exciting thing is it is facilitating a lot more writing for me,” Maxfield said.  “When you have a lot more people to play for, you have an opportunity to make more music. So that has been really cool reaching out and connecting to more people and letting them listen to our music and our art.”

The Steelwells, who have been around for two years, also mentioned the increase in song writing. Yet despite the contest, the band’s inspiration remains the same. What is The Steelwells’s primary inspiration? “My personal life,” said lead singer Joey Winter. “It has always been that way. It is my interpretation of the things around me. A lot of it is looking inside myself and questioning things that I do and say and think and see. I like to be able to share part of myself as well as make a social commentary on things that I find interesting.”

Regarding his inspiration, Maxfield of Fictionist said, “I think there is inspiration for great songs all around us. I think the challenge is to be aware of the inspiring things that are on your doorstep verses having to search for them in faraway places. For all these new songs, I have tried to let them grow out of really quiet, mundane things that I find new ways of looking at. I think really good songs come from people taking the ordinary and making the extraordinary out of it.”

During this contest, both bands are focusing on upping their game. “Really, the live performance is one of the hardest things to do as a band, and if you can nail it, that is when you really succeed,” Maxfield said.

“What we are trying to do right now is keep our heads on,” Winter said. “It is important to us that our vision of the band is put across correctly and people understand who we are. It would destroy what we are if we felt like we had compromised what the band was all about. ...There is sincerity from everyone involved. We are who we are and that is not going away.”

LDS artists in the rock music industry are often sensationalized and face challenges that threaten their personal views and standards. “Outside of Utah, we are a bit of a novelty, and I get all sorts of things,” Maxfield said. “But I try not to think too much about it. Really, what I am out to do is write beautiful songs that connect with people. I am not trying to be preachy, but at the same time, I don’t try to avoid gospel topics in my songs or anything like that. …So when people listen to them, if they sound like they are religious, it is what it is. If they sound like they aren’t, it is what it is. I am not trying to be anything but honest, to be genuine.”

Also LDS, Winter said, “Sometimes it isn’t easy; there are certainly things I have to come to terms with within myself. There are people on both sides who don’t understand certain things, outside the Church and inside the Church. It is a matter of: do you know who you are? Personally? If you do, then you are fine. … It is not for the faint of heart! You have to know why you are doing it. It is not an easy place to be, but it is worth it.”

To support Fictionist and The Steelwells, visit the Rolling Stone website at  to check out the bands and vote. The eight bands that advance to round two will be posted March 16.