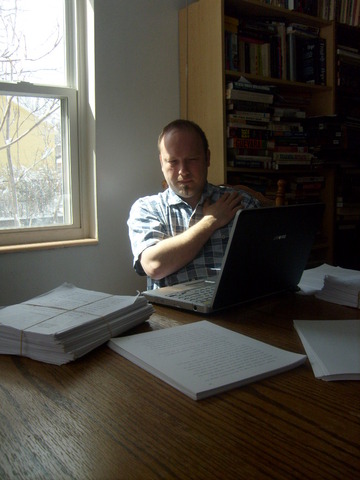 Most people take it easy during their lunch breaks—snack, check e-mail, browse status updates on Facebook.

Not Magna, Utah, native Robert Goble, who is head custodian at Orchard Elementary School. On lunch breaks, Goble pulls out his laptop and writes award-winning novels. Well, at least one award-winning novel. Last year Goble submitted a manuscript to the Marilyn Brown Unpublished Novel Competition, a contest aimed to help LDS writers get published, and won it.

Goble said he heard about the contest a day or two before the deadline. He had an almost-completed novel manuscript but needed to make a few changes to it.

“I just barely made [the deadline] by that afternoon—getting to the post office," he said. "In fact, I didn’t even think they’d look at it at that point. That’s why I was extremely surprised that I won, because I really believed I got it in too late. But obviously it made it.”

Goble received the award and a $1,000 honorarium from Marilyn Brown at a banquet hosted by Utah Valley University, which administers the award. Marilyn Brown and her husband first started the competition in 2000 to encourage authors, particularly those who are interested in writing about Mormon cultural experiences. Since then, a number of respected LDS authors have won the competition, and Goble says he’s honored to be counted among them.

Goble is a dedicated writer, and while winning the Marilyn Brown Novel Award is evidence of his dedication, perhaps his writing habits are an even better indication. Goble works on his novels when he can, and he says some of his best writing happens while he’s at his day job.

“It’s the type of job where I can let my mind wander a little bit,” Goble said. “I’ll go in and pound out notes during that lunch break, and then I’ll come home and later in the evening I’ll sit down and flesh out some of those notes.”

As a father of three, sometimes it’s difficult getting writing done at home because his kids want to play with him.

“Sometimes I feel like I’m not spending enough time on the writing for that reason—and I think it’s a good reason,” he said. “I want to put my family first; I don’t want to neglect my family.”

Not only does he sacrifice his lunch breaks and his evening hours to give outlet to that passion, Goble has also taken time off work for his writing. When Goble was finishing the novel manuscript that he eventually submitted to the Marilyn Brown Novel competition, he took two weeks off just to write. He described one day when he got up at 6 a.m. and wrote straight through all day until his wife came in and asked him if he wanted dinner. He was shocked to discover that it was dark outside.

Goble’s award-winning novel manuscript, which is called Across a Harvested Field, was picked up by Parables Publishing, a small press that prints realistic LDS fiction, and was released this past summer. Goble has since been promoting his book and is also working on a few other novels. He’s particularly interested in writing stories that take place in the west side of the Salt Lake Valley, which he feels has a history that has largely been untapped by writers.

His advice to other aspiring authors is good advice for anyone who has a daunting goal ahead of them:

“It takes a lot of dedication and persistence and discipline—you really have to stay disciplined on it—if you don’t, it will just stay a dream.”