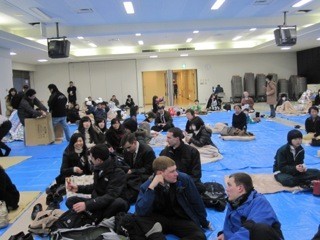 In the hours following the devastating magnitude-9.0 earthquake in Japan and subsequent tsunami in the area where his LDS missionary son was serving, Friday proved to be a long, gut-wrenching day for Mike Taylor and his family.

By 11 p.m. that night, he had received word from officials of The Church of Jesus Christ of Latter-day Saints that someone had talked to someone who in turn had talked to his son — Elder Kelvin Taylor, who was among nearly two dozen missionaries in a makeshift evacuation center.

An hour later, the Taylors received a confirming e-mail from their missionary that he was OK. And by Monday afternoon, the Taylors were exchanging photos and e-mails with other families sent by their missionaries in Japan, relieved to see familiar faces safe and sound and to hear firsthand accounts of survival followed by service.

Some 20 missionaries from the Japan Sendai Mission — including those serving in some of the most affected coastal areas — were attending a zone conference in Koriyama when Friday's quake hit. Koriyama is located 35 miles inland from one of the damaged nuclear plants.

"Really crazy ?— cannot even describe how humbling it was, living off Ritz crackers and bread that the fire station gave us, basically like refugees," wrote Elder Taylor Ellis to his family in Heber City.