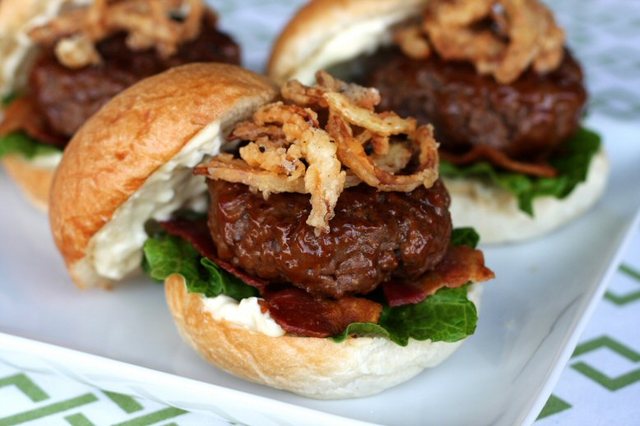 When you combine two cool people with lots of yummy food, you know the results are going to be good.

And for Kate Jones and Sara Wells, authors of food blog Our Best Bites, the results are very good: they just won a Better Homes and Gardens (BHG) cook-off.

The magazine invited them to participate in the cook-off with multiple other food bloggers, where they had to pick a recipe from The New Better Homes and Gardens Cookbook and adapt it into a creation of their own. Their recipe? BBQ Bacon Burgers with Bleu Cheese and Crispy Onions. And yes, they’re as good as they sound and look.

The teamwork involved in creating the recipe and winning the contest was a perfect example of the harmony they experience daily, despite living in different states.

“For the biggest decisions for both of us, everything has come together,” Jones said. “How we’ve wanted to design our blog, how we wanted to do things—we always end up coming to the same conclusion, almost independently of each other. And so we decided we wanted to do a burger, we decided we wanted to do some kind of bleu cheese, and we cooked the onions, and it all just kind of happened, the way everything else has. We never argued about it, we just made it and we loved it. I had a few variations and she had a few variations and we both tried them out and just went with the things we liked the best.”

Cooking was only part of the event, though.

“My favorite part about the BHG cook-off was seeing the behind-the-scenes workings of the magazine,” Wells said. “I've been reading that magazine since I was a little girl when I'd flip through the pages of my mother's issues. Besides seeing the amazing test kitchens, we got a tour of the photo studios where they shoot scenes from the magazine. It was so cool!”

Jones’ favorite part was meeting all the people. “I don’t think I stopped laughing the whole time I was there,” she said. “The other bloggers were so wonderful, and all the people from BHG and Wal-mart were just amazing. I felt like we were these little bloggers coming into this huge magazine and they could have acted like it was this huge inconvenience to travel through New York to hang out with all these little people, and they weren’t like that—they were genuinely interested in what we were doing. They were hilarious, laid back, nice . . . they were approachable, they were funny, but they were really smart and quick, and it was really fun to meet them and get to know them.”

A few years ago, neither would have expected to be in this situation. Wells and Jones started out as acquaintances through mutual friends, but that bond soon bolstered to a much stronger friendship online as they both began raising families in different states. How did that relationship beget the idea for a food blog? “I don’t know,” Jones said. “I knew we had similar tastes, that I could count on her for a good recipe—if she said it was good then I always knew it was good. We used a lot of the same recipes and the same ingredients. . . . I just knew we would be compatible.”

So after having just had a baby and completed a move to La., Jones suggested the project to Wells, who was pregnant with her second child. “We never meant to make any money, we never set out to become really popular, we just wanted to share our recipes with each other and with our family. And it just kind of took off,” Jones said.

After two and a half years, Wells is still enthusiastic. “It has been amazing to watch it grow. We never, ever expected that. We didn't start it to be ‘big’; we just did it because we thought it would be fun,” she said. “It's been a blast meeting so many people and having the opportunity to do so many fun things because of it.”

The recipe ideas come from all over: Jones reads other cooking blogs, as well as cookbooks and cooking magazines.

“I find inspiration for my recipes everywhere,” Wells said. “Sometimes I literally dream of things. Other times recipes come simply because of the ingredients I have available at the time, and other times I try things that taste amazing and then try to re-create the flavors at home.”

Both of them keep a notebook handy at all times to jot down ideas whenever inspiration strikes, and both like to get their hands dirty. “I’m so messy,” Jones said. “I tried out a new recipe last night and my kitchen was just trashed.”

Wells is in complete agreement. “I'm kind of a disaster when I cook. I get so into it that I just trash my kitchen,” she said. “I have a quote on my fridge at home that says, ‘Cooking is like love: one should enter with reckless abandon or not at all.’”

And they have definitely poured themselves completely into this project. “I’ve learned so much about human nature and other people,” Jones said. “I feel like people really want a human connection in all of it. I notice that it’s more gratifying to us and our traffic numbers are also better when we really make an effort to interact with our readers.”

Wells also believes strongly in the power of food and connection. “Honestly, I believe food can bring people together in a really special way,” she said. “My mom was never a fancy gourmet cook, but she cooked with so much love, and she always let me help. We ate dinner together as a family every night. . . . That's where as a child I felt loved, safe and taken care of. It's where we talked about our days, our friends, our jobs and our lives. I have so many food-related memories of my childhood and I want that same things for my kids. One of the main goals of our blog is to show people that cooking doesn't have to be a chore—it can be a really fun and enjoyable way to care for the people you love.”

So if you want better relationships in your life, get cooking.

*To watch a video of the women introducing their winning recipe, click here.