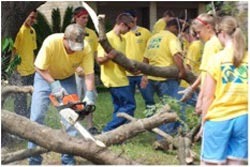 In the midst of World War II, Franklin D. Roosevelt came across a newspaper clipping about the ancestry of England's Prime Minister Winston Churchill and his wife, Clementine. The newspaper article noted the couple's common heritage with Mormons in Utah. As Roosevelt and Churchill had become friends by this time, the president sent the clipping to the prime minister, accompanied by a lighthearted letter.

"Hitherto I had not observed any outstanding Mormon characteristics in either of you," he wrote. "But I shall be looking for them from now on." He further added, "I have a very high opinion of the Mormons . . . they are excellent citizens."[1]

Read the rest of this story at patheos.com