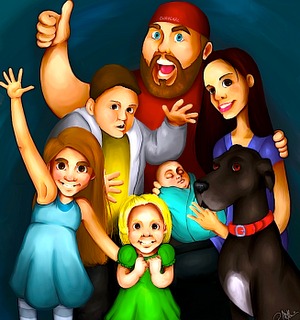 Sometime this year, online video comedian Shay Butler and his family’s YouTube channels will likely pass a half-billion upload views. At the heart of that success is a quintessential man-child. Butler, best known as Shaycarl, has created a series of reality shows that could draw comparisons to a cleaned-up Osbournes, adds a dash of “Tool Time” sensibility and finishes with a question that sparks many classic American family sitcoms: How did HE get HER to marry HIM?

ShayCarl may play the fool to wife Katilette’s exasperated straight woman on YouTube, but he’s not clowning around. His collaborative production company, recently featured in The New York Times, is just one of many examples of how he’s parlayed comedic snippets into a budding online mini-empire. But that manic part? Yeah, that’s real. After sending seven questions via email to Butler, I received a 2,000+ word block of text in response.

What he sent was an epic tale about a young man seeking his place in the world, happening upon YouTube and finding his way to internet stardom. Here’s that story:
Read the rest of this story at forbes.com