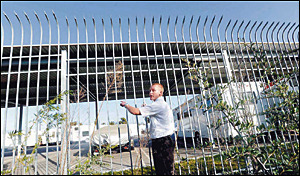 Cameron Johnson came to Southern California on a mission to save men's souls. On Monday, he saw a chance to save a man's life.

Johnson, 19, was one of three civilians who leapt into action Monday when a twin-engine plane crashed into an RV storage yard on Tippecanoe Avenue.

He helped pull the plane's pilot - Lonny Wayne Rollins, 39, of San Luis Obispo - away from the craft as it was leaking fuel.

"I kind of realized in the process that if I die doing this, the best way to die is to help somebody else," Johnson said.

Rollins and his business associate, Greg Fitzgerald, 61, of Paso Robles, were critically injured in the crash, firefighters said.

But it could have been worse.

If the wrecked plane had caught fire and Johnson wasn't there to pull out Rollins, Rollins could have died, said Jason Serrano, spokesman for the San Bernardino Fire Department.
Read the rest of this story at redlandsdailyfacts.com