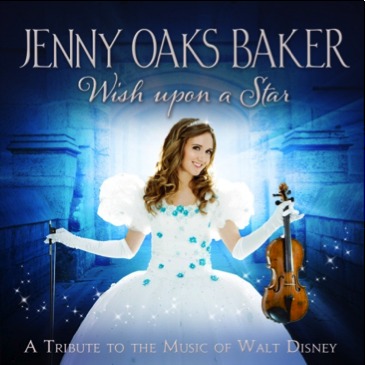 Her newest album, Wish upon a Star: A Tribute To The Music of Walt Disney is among five finalists in the Best Pop Instrumental Album category.

The songs on the album were produced and arranged by Emmy-award-winning composer Kurt Bestor. The Grammy nomination is a first for Baker, who is on the  Shadow Mountain Records (the record label of Deseret Book).

Deseret Book CEO Sheri Dew gives credit to many individuals for this nomination. “Jenny Oaks Baker is an extraordinary talent. She makes the violin sing,” Dew said. “Her talent, combined with the superb touch of producer Kurt Bestor and our music team’s skillful handling of this product have proven a winning combination. We are honored to have a CD showcasing such sheer talent on the Shadow Mountain label.”

Baker issued a statement this morning about her nomination: “I am absolutely thrilled about this Grammy nomination! I’m grateful to Shadow Mountain Records for everything they’ve done to secure this nomination and to help my music be heard around the world. I’m also grateful to Kurt for his amazing arrangements and superb artistry. I feel so blessed.”

This is the second Grammy Nomination for Shadow Mountain Records. Gladys Knight won a GRAMMY under the label in 2005 for Best Gospel Choir Or Chorus Album.

The 54th Annual GRAMMY Awards will take place February 12, 2012 and will air on CBS.