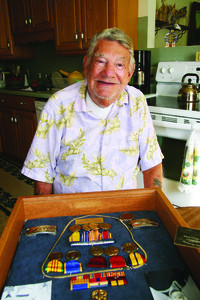 In August 1941, Bill Jarvis' uncle signed a letter giving permission for the 17-year-old to enlist in the U.S. Navy. The teenager could not have known that he would soon become an eyewitness to some of World War II's most pivotal events — beginning with the "Day of Infamy."

On that day, Dec. 7, 1941, more than 2,400 men lost their lives when the naval and air forces of Japan attacked U.S. Naval and Army forces on the Hawaiian island of Oahu. Of the 21 ships sunk or damaged at Pearl Harbor, eight were the pride of the U.S. Pacific Fleet, the battleships. One of those battle wagons, the USS Arizona, still rests in the harbor at her anchor, a memorial rising over her now-decaying hull. Seventy years after an explosion ripped open her bow, oil still rises to the surface at the rate of two to nine quarts per day. Tourists visit the site daily, American and Japanese standing side by side, many tossing flower leis in honor of those still entombed below. (Please see www.nps.gov.)