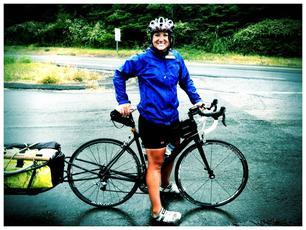 Serena Roundy rode alone for 2,300 miles. She did it to raise funds to mentor troubled youths. It was a solo act that wasn’t planned as such.

She came thousands of dollars short of her collection goal and saw her father endure a nasty crash on the journey’s first leg.

But none of it kept Roundy from loving the trip.

The 29-year-old Mormon from the Midvale East 7th Ward, Midvale Utah East Stake, returned in late July from the expedition with a scare in Jackson Hole, Wyo., where her father suffered a punctured lung and six broken ribs. The pair were attempting to take the same course that he rode as a member of the Utah State University cycling team 50 years ago.