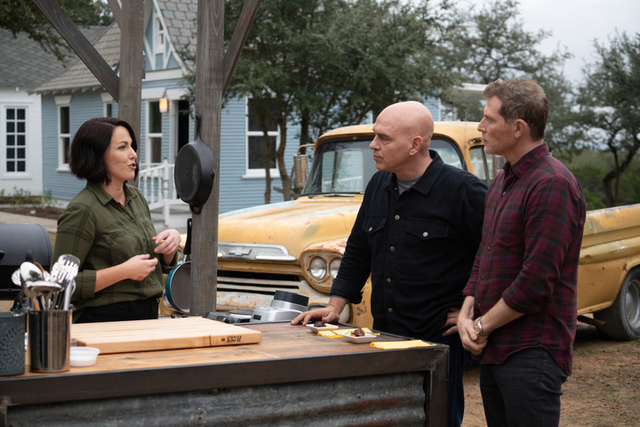 At a time when food blogs were a dying breed—at least according to some in the industry—Susie and Todd Bulloch quit their salaried jobs to pursue a barbecue blog, HeyGrillHey.

But this gamble didn't come without serious reflection and even revelation. "We relied on prayer and long conversations with each other, as well as a lot of pondering in our hearts to decide on our next step,” Susie says. Despite trusting the promptings the Bullochs received and putting their combined powers into building their blog and brand, Susie notes, “That doesn't mean the path has been easy or we didn't question the decisions we were impressed to make, but we have always felt guided along this crazy journey.”

► You'll also like: Gourmet Grill Recipes to Wow Your Neighbors With This Summer

"This crazy journey" has included building a million-dollar brand and being featured on The Food Network on multiple occasions. In fact, Susie will appear on The Food Network's newest competition show, BBQ Brawl: Flay v. Symon, that will premiere August 1, 2019. In the show, culinary icons and Iron Chefs Bobby Flay and Michael Symon coach eight cooks through intense barbecue battles that result in the winner starring in their own Food Network digital series.

Among those competing for the title of best barbecuer is Susie. About the "unique experience to be able to have front-row seats to Iron Chefs" and compete on the show, Susie enthusiastically says, "It was awesome! . . . Being on the same platform as those people was unreal."

The competitive drive of the show presented new challenges for Susie, who was cooking under a deadline with unfamiliar tools and ingredients on unfamiliar grills. "It felt like things I had done a million times I was doing again for the very first time during the show. Everything was new," Susie says. "Being under a time limit to cook anything is always stressful, but watching a clock count down just made me realize how precious a minute was."

Add to the anxiety-inducing environment producers asking questions, cameras shadowing you, and world-renowned chefs looking over your shoulder and sampling your food, and things are bound to get intense.

Referring to the fact that she had to worry about "trying not to have a panic attack" in front of cameras as Iron Chefs talked into her ear, Susie called the experience "mildly terrifying." She continues with a laugh, "I think I might have PTSD a little bit. . . . I feel like people are going to be shipping me boxes of bandaids after they watch."

And when the show kicks off on August 1, Susie is among the thousands across the nation who will tune in. "In the end, I am proud of what I did. I feel like it was a fun experience and I learned so much and yeah, I have no regrets. I am just excited to watch it and see how it all unfolds," Susie says. "There were so many funny and heartfelt and charming moments and terrifying moments and embarrassing moments."

Among those heartfelt and charming moments during the show were the times when Susie stood for her standards, expressing that "family is one of the biggest driving forces for sure for my business." She continues, "I think that barbecue is so tied to our culture religiously because we like to bring people together, and we like to break bread, and we like to spend quality time, and I have found that barbecue is one of the best ways to do it."

Food has always been an integral part of Susie's family life. Having grown up in a family that owned a restaurant, cooking is in Susie's genes. Many of her best childhood memories involve sharing a meal over a campfire or kitchen table and helping other families make memories of their own in her family restaurant. After marrying Todd, Susie worked to make those mealtime memories an important part of her own family.

But Susie didn't discover her love for barbecue until seven years ago, when she was hired by a company to create recipes for their wood-burning smokers. "I fell in love with barbecue and became a little bit obsessed with it. . . . It is a whole lifestyle. It is a whole community, and it just fit in really well with how we like to eat and how we like to live and how we like to spend time with the people that we care about. That was it for me. Barbecue just stuck."

As Susie began transitioning into this world of barbecue, she acknowledges, "My husband and I together, every step that we have made in the barbecue world we felt has been inspired. We try to be spiritually minded and think about our family first and think about our community and . . . that has been a guiding principle for our business and for our personal lives and that has led us to some pretty cool places."