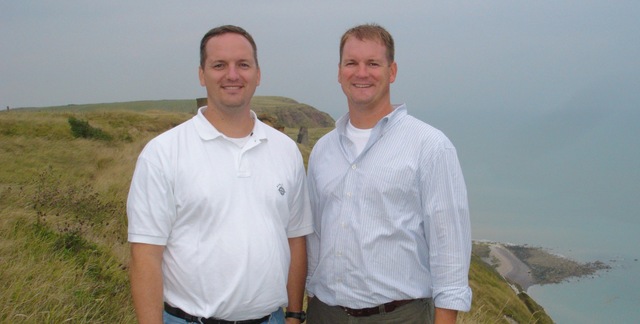 As they swam from England to France—the Mount Everest of long-distance swims—brothers David and Richard Barnes braved frigid temperatures and treacherous water currents, faced high winds and waves, endured physical pain, tangled with jellyfish, and carried on through other obstacles.

More than a decade later, the siblings, members of The Church of Jesus Christ of Latter-day Saints, will receive an unanticipated honor for their perseverance in pursuing their dream.

The Barnes brothers are the first two Utahns to swim the English Channel and were inducted into the Utah Sports Hall of Fame at a banquet in the Little America Hotel on Monday, Oct. 14.

Both men, along with family members, were thrilled and humbled when notified of the good news. They are also grateful to bring some attention to the sport of swimming.

“It was definitely a surprise, just really exciting,” Richard says. “It’s also kind of nice to be ambassadors for our sport, which is underrepresented sometimes.”

Dave feels honored to have his name placed alongside so many great athletes and accomplishments in Utah sports history.

“When I look at the other people in the Utah Sports Hall of Fame, it’s extremely humbling,” David says.

The brothers have been swimming most of their lives and set the goal to tackle the English Channel together after David finished medical school and Richard completed law school.

In August 2005, they attempted the swim together but soon became separated. David had to pull out early with symptoms of hypothermia and nausea but instructed the support boat not to tell his brother so that Richard would keep going.

Richard, a former captain of the BYU swim team, eventually reached the beaches of France after 16 hours and 43 minutes.

The Channel Swimming Association later engraved Richard’s name on a silver chalice and voted him the “Endurance Athlete of the Year.”

“It did take me about a month after the swim before I could raise my arms above my head,” said Richard, now an attorney and the swimming coach at Jordan High School.

After another year of training, including ocean swims near San Francisco, David, an emergency room doctor, returned the following year for a second attempt. Despite running into a jellyfish and other challenges, the former University of Utah water polo player reached France in 14 hours, 1 minute. It’s 21 miles across the English Channel, but the strong current forces many swimmers to cover as many as 40 miles from shore to shore.

David will never forget that feeling of triumph that washed over him as he held up a handful of sand and declared, “Viva la France!”

“After swimming for 14 hours, struggling with nausea and cold, to stand on that beach in France having accomplished my goal, I didn’t feel any pain, just total elation,” he said. “It was an amazing relief that this thing I had focused on for so much of my life was now accomplished. It was an ecstatic feeling to know that I had swum from England to France.”

Over the years the brothers have spoken at numerous youth firesides and shared spiritual lessons from their experience of swimming the English Channel.

One lesson David has shared centers on the power of prayer.

Although he felt prepared, doubt and discouragement flooded his mind as he started out, and he worried he wouldn’t make it. He began to pray continually. “A short time after praying I felt a peace and calm come over me and I knew that everything was going to be fine,” David says. “It made me realize that Heavenly Father knew what I was doing and was willing to give me some comfort.”

1. You have to have a support boat to guide you on your path and steer you the way to go.

“Similarly, in life, we need to keep our eyes fixed on the Savior to be led and directed to our ultimate goal—eternal life,” Richard said. “Without that guide we cannot make it back to our Father in Heaven.”

2. After the trial of faith comes the greatest blessings.

Sometimes in life you face the greatest difficulty right before receiving your greatest blessings, Richard says.

“Three hours into the swim, I hit my low point,” he says. “My stomach finally gave out, after breathing in diesel fumes for hours and being tossed about by the waves. I turned to the side and violently threw up. I thought that was the end. I was ready to pack it in right there. There was no way I could go on. I sat up and did some face-up breaststroke. Here was a turning point for me. I had a decision to make: Give up, or keep going through extreme difficulty. Fortunately, I had help right when I needed it most. My brother John calmly looked at me and said, “Take your time.” His calmness reassured me. A minute or so later, I stuck my face back in the water and started swimming. I began the best portion of my entire swim. I had broken out of the beginning jitters, I finally felt strong and able to make a lot of progress.”

3. There is no resting in our eternal progression.

In the Channel, there is no resting.

“There were feeding stops, for a minute or less, if possible, but there was no resting. Even if you were stopped, you are always being pushed one way or another by the currents. We have to keep moving in the right direction,” Richard said. “Are we moving towards exaltation? Or, are we moving in another direction. There is no resting.”

The brothers prepared for a 12-hour swim in 2005, but it took Richard more than 16 hours to reach France.

At the end of his swim, Richard was nervous to stand up because he thought his legs would give out.

“I rode in on the very last wave before I stood up,” Richard said. “Standing on the beach, standing in France after so long a journey was incredible. It was indescribable. I literally felt no pain.”

One of the biggest lessons the brothers learned from their historic swim is that big goals are impossible to accomplish alone. Richard credited his family in the support boat, his older brother David, and the Savior for helping him to reach his goal. It’s the same in life, he says.

“This is something that I always personally emphasize,” Richard says. “This is not something you can do alone. I can’t imagine trying to do this without my brother, and without him I never would have done it. It was a partnership I would say.”