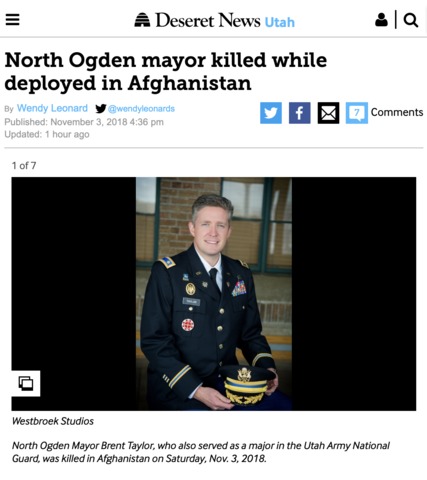 U.S. Army Maj. Brent Taylor was the mayor of North Ogden, Utah, a father of seven, and a member of The Church of Jesus Christ of Latter-day Saints. Taylor was killed in Afghanistan on Saturday while serving what was expected to be a one-year deployment.

According to the Deseret News, “National media reported one service member was killed and another was wounded in 'an insider attack' at the Kabul Military Training Center on Saturday afternoon when a member of the Afghan security forces opened fire on them, officials told the Washington Post. The attacker was then killed by Afghan forces.”

In a January article in the Deseret News, Jennie Taylor described her and her husband as people who both “loved America,” and they let their actions speak louder than their words in demonstrating that love. At the time of Brent’s deployment, Jennie had just given birth to their seventh child.

Jennie Taylor told Deseret News that they didn’t feel that they were doing anything exceptional. Instead, she said they were just answering a call they felt was theirs to answer.

“There are men and women who go off to a deployment every day with no fanfare, with no attention, with no news articles on one individual. It’s what they do. The call to serve comes up, and you just answer it,” she said.

“I hope my kids grow up to learn to answer the call to serve wherever it comes, not necessarily in the military but whatever profession, whatever community need, whatever religious need. I hope they know that in our family, we help. In our family, we do what we can. If it’s something we can do, and the call comes to serve, we say yes.”

Mormon Life MilitaryMilitary,Mormon Life
Comments and feedback can be sent to feedback@ldsliving.com