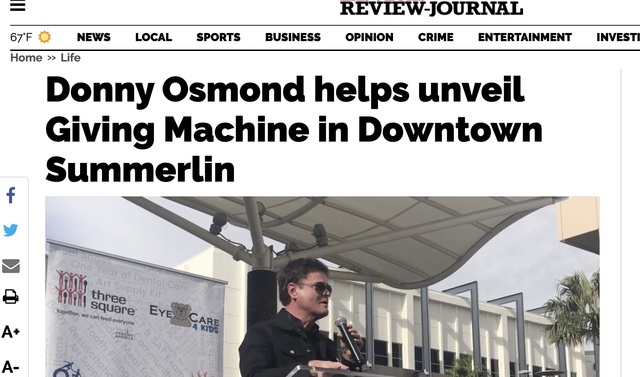 Donny Osmond, a popular Latter-day Saint and music icon, helped unveil one of the ten Giving Machines throughout the world in Summerlin, Nevada on Thursday as part of the #LighttheWorld campaign for The Church of Jesus Christ of Latter-day Saints.

Donny and his son, Brandon, were the first individuals to donate to the innovative vending machine after presenting it to a large crowd in downtown Summerlin. The Osmonds were also joined by John Boswell, the director of the #LighttheWorld Giving Machines for the Church. The majority of donations that will be made through this particular Giving Machine within the next few months will stay in the surrounding areas of Las Vegas.

"It's anonymous, but you're helping so many people without the obligation of them wanting to give back to you," said Osmond. "That's the spirit of giving." You can watch the full video of the unveiling here.

The Giving Machine in Las Vegas is one of eight machines that can be found within the United States during this holiday season, with the two machines outside of the U.S. being located in London, England and Manila, Philippines. This will be the third year wherein the Church has utilized Giving Machines to distribute all types of gifts to those who are less fortunate around the world. To stay updated on how you can reach out and serve during this holiday season, visit www.LightTheWorld.org.