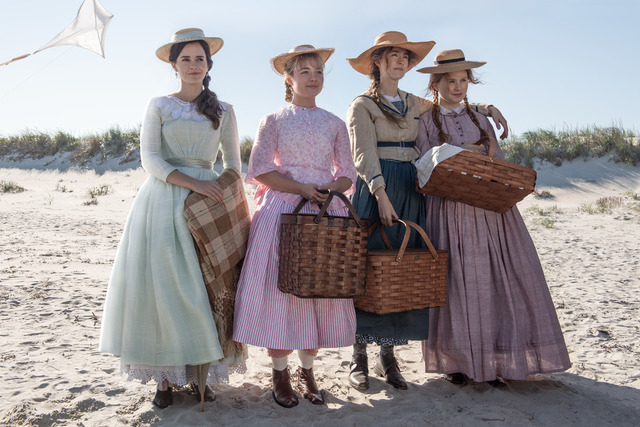 This lovely film is an adaptation of Louisa May Alcott's popular novel Little Women. As a movie critic, I loved watching this new version because it was so well done and immensely charming. As an author, I loved watching Jo March develop as a writer and learning a little bit more about Louisa May Alcott. If you’re a writer who would like help launching your book into 5 or 6 figures, check out my author coaching services at www.FromBook2Business.com  (My shameless plug for the day).

Now, onto the film—Director Greta Gerwig really brings these characters to life as she blends the coming-of-age story and the inspiration of the beloved book beautifully. She was six months pregnant by the time filming ended and went into labor 24 hours after turning in her rough edit, so you could say this book was truly a labor of love. She has become an excellent filmmaker. She invited several cast members from her award-winning movie Lady Bird to return to work on this movie, a film sure to be another award winner and instant classic.

The cinematography in this movie is really beautiful. The story of the March sisters takes place in Concord, Massachusetts, where you can still see Louisa May Alcott's home today as well as all of the lovely surroundings that still look like you're in the 1800s.

The cast is fantastic and includes Saoirse Ronan, Emma Watson, Florence Pugh, Oscar winners Meryl Streep and Chris Cooper, Laura Dern, Tracy Letts, and Eliza Scanlen. As expected, Saoirse Ronan is outstanding. She has already received a Golden Globe nomination for her role as Best Actress and will, undoubtedly, also receive an Oscar nomination within weeks. What’s interesting is that the leading ladies who play the classic American daughters are not actually American at all. Saoirse Ronan is Irish, Emma Watson and Florence Pugh are English, and Eliza Scanlen is Australian. Their American accents were very good!

Laura Dern’s performance as Marmee March was very sweet. There is an especially powerful conversation her character has with one of her daughters about the difference between feeling anger versus expressing it. She admitted that she struggled with that every day and tried to behave better than she felt inside. What an important lesson for all of us. Marmee was always aware of the needs of others and she taught her daughters to serve, another good lesson for us. Laura Dern was really great, by the way, in the recent Netflix movie Marriage Story, where she plays a high-powered divorce attorney. It's a sad movie but also has a remarkable performance by Adam Driver that made my jaw drop in awe, earning him a well-deserved Golden Globe nomination.

As for Oscar winner Chris Cooper, he looked much healthier in this role as Mr. Laurence than how he appeared in A Beautiful Day. Meryl Streep was wonderful, as expected. She isn’t in very many scenes but steals them when she is. The role reminded me of Violet Crawley, the Dowager Countess played by the hilarious Maggie Smith in Downton Abbey. All of the scenes with Saoirse Ronan and Tracy Letts are extremely entertaining. Florence Pugh is another standout in the movie.

As a period piece, the houses, clothing, and environments are perfect. Careful attention to details makes the film feel more realistic and interesting. For example, you often notice the black ink on Jo March's fingers because she has spent all day writing with a fountain pen. The scenes at nighttime in the home are lit with candles everywhere, creating an especially quaint ambiance. For those who grew up in a house full of girls, the scenes where all of the girls explode with excited chatter at the same time may look familiar. Some may think those scenes are too noisy and chaotic, but they certainly are realistic.

But not everything is perfect. The scenes constantly bounce back and forth in time, so some viewers might get confused about the time line. Sometimes you can distinguish between the past or the future because the color palettes in the scenes are different, but not always. For example, the scenes from the past have brighter, happier colors; whereas, the color shades in the future are more grey and sad. The hairstyles are often a clue as well, but again, it’s not always reliable.

The casting seemed a bit off for two of the male characters. Academy Award nominee Timothee Chalamet did a fine job as Laurie, but he looked too young for the role, especially as the other characters aged. Louis Garrel’s performance as Friedrich Bhaer was a bit confusing because his accent sounded more French and he looked more Italian, yet he was supposed to represent a young man from Germany.

Is it okay for your kids? (PG)

Some kids will be bored, especially boys. There is a lot of estrogen in this movie!
There are scenes that display sickness and talk of death. While the movie takes place during the Civil War in America, you don't see any soldiers or battle scenes. Romance, kissing, proposals, and marriage are frequent topics. There are scenes with some name calling, but no profanity. Some of the women's clothing are tight-fitting to reveal cleavage.

Sisterhood is one of the biggest themes in the movie. Former Young Women general president, Bonnie L. Oscarson, stated, “To be sisters implies that there is an unbreakable bond between us. Sisters take care of each other, watch out for each other, comfort each other, and are there for each other through thick and thin. The Lord has said, ‘I say unto you, be one; and if ye are not one ye are not mine’ (Doctrine and Covenants 38:27).”

As an extension of the theme of unity between sisters is the underlying idea of the importance of family, love, marriage, friendship, and service. Each of the sisters has a passion for a different art form (writing, art, music, theater) and they all exhibit a certain desire for independence and freedom to develop their talents and create a career. Emma Watson plays Meg, the oldest sister, who notes, “Just because my dreams are different from yours doesn’t mean they’re unimportant.” Christ taught the Parable of Talents (Matthew 25:14-30) to illustrate the importance of magnifying our own talents that the Lord has blessed us with. We all have different abilities that could be used to bless the lives of others.

Other themes of the movie revolve around gender roles during the 19th Century in America. Women were not able to own property, vote, or have big careers like they can today. Female empowerment seems to be a common theme in most movies nowadays and, while this movie certainly addresses that same idea, it presents it a manner that is wrapped in the culture of the time and allows viewers to reflect on how far society has come since then. The Family: A Proclamation to the World reminds us of the valuable roles each gender plays in the Lord's Plan of Happiness.

Here are some interesting lines from the movie that could offer some fascinating family conversations!

⦁ “I can’t afford to starve on praise.” –Jo March

⦁ “I’m not Shakespeare.” –Jo “Thank goodness. We already have him.” –Mr. Dashwood

⦁ “No one makes their own way in the world, not really.” –Aunt March

⦁ “It’s possible to be right and foolish.” –Aunt March