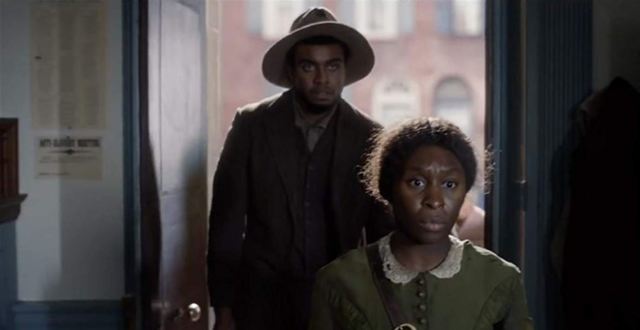 There has been a lot of debate about whether or not Harriet Tubman’s face should be on the $20 bill. She was quite an extraordinary woman and you will learn a lot about her inspiring life in this dramatic biopic; however, viewers need to know that not everything in the film is historically accurate.

You will learn some correct facts about her, such as she was the most successful conductor in the Underground Railroad. During the Civil War, she became a spy for the Union Army. She led 150 soldiers in the Combahee River Raid, rescuing over 750 slaves. She is one of the few women in U.S. history to lead an armed revolt. She later remarried and continued to fight against the “monster called slavery.” Her last words were, “I go to prepare a place for you” (John 14:2). You will be in awe as you watch a God-loving woman change lives and history.

How do you feel about a British actress playing this great, American heroine? Apparently, there has been quite a lot of backlash about it. It doesn’t bother me one bit. Cynthia Erivo does an outstanding job. She sings and has actually earned a Grammy! Even more impressive is that she also has earned a Tony Award and an Emmy! Wow! Will she also be nominated and earn an Academy Award, too? There has been some Oscar buzz circulating around her for this role. And by the way, she has been cast to play legendary Aretha Franklin in an upcoming movie. Wow. If you enjoy this movie, check out Cicely Tyson’s performance as Harriet Tubman in A Woman Called Moses.

It was important that the movie didn’t portray Harriet as always being a strong, black, confident woman. Instead, it showed how frightened she was most of the time and how often she doubted her path and what God was doing with her life. What makes her different from the rest of us who feel that way sometimes is that she never gave up.  The song "Stand Up" will be a hit that gives people strength to make a positive difference in the world!

Harriet Tubman actually did have dreams and visions, as portrayed in the film.  Sometimes the moments that are shown in the movie come dangerously close to turning her into a superhero with magical powers. You’ll be touched that Harriet didn’t simply enjoy her new-found freedom when she first escaped slavery to Philadelphia, but she felt compelled to return to danger in order to rescue her family and others so that they could be free, too. Harriet Tubman felt the same way many others have throughout history: Be free or die. Those of us who live in countries where freedom is enjoyed need to never take that for granted. Let us never forget the price others have paid to live under such conditions.

Director Kasi Lemmons chooses to tell the true story with a linear approach, something that makes the story easy to follow, yet possibly not as creative a decision as it could have been. The trailer made it look like the movie was going to have a lot more action. Instead, it’s a bit sluggish. Act 1 struggles to grab your attention, but by Act 3 you’re hooked.

For the most part, the acting was very good. Leslie Odom Jr. and Janelle Monae are so elegant in their roles. Joe Alwyn has been taking some hits because he isn’t as menacing or evil as some other slave owners were portrayed in movies.

Kids might be bored in the beginning, but they’ll learn a lot about slavery and U.S. history if they can keep watching. It would be great if schools showed this movie and then talked about which parts were historically accurate, as well as slavery in general and what it takes to become a leader with so much determination. There is use of the “N” word and other profanity. You see slave owners abuse their slaves physically and emotionally. A woman gets beat to death and you see the violence and blood. Other people are shot and die.

Trust God. God and religion play a big role in the film, as well as in Harriet’s life. It was really great that Hollywood didn’t shy away from the topic but chose to include the spiritual aspect of her personal journey. One of the characters, played by Henry Hunter Hall, said to Harriet, “It seems like you talk to God and He talks back. Maybe you could introduce us.” Another character, played by the lovely Janelle Monae, tells Harriet, “You are so beyond any man I’ve ever met. So far beyond. What’s a man to a woman touched by God?” Indeed.

Determination, courage, and tenacity are very strong themes throughout the film. Harriet made a point that, while led by God, she still had to do her part. She said, “God was watching but my feet was my own.” Her father, played by Clarke Peters, reminded her to be brave when he told her, “Fear is your enemy.”

Family and freedom were the two principles Harriet loved most which propelled her to action. She stated, “God don’t mean for people to own people.” Her life’s work was truly selfless.