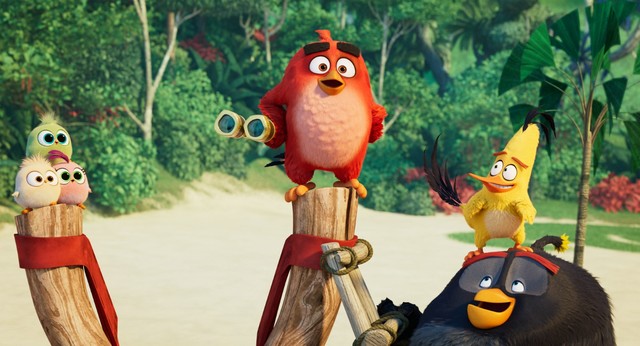 Does anyone play the Angry Birds Classic app game anymore? Sony Pictures is hoping so. They raked in $350 million in 2016 for the first The Angry Birds and would love a repeat for their sequel. Did you like the first one? If yes, then you might get a kick out of this one. If not, then skip it. Do you even remember anything about the first movie? Nope, neither do I. Audiences are mostly wondering why this movie exists. This sequel seems like an obvious cash grab and a desperate attempt to revive the app.

This animation is very colorful, filled with pop culture references, and directed by Thurop Van Orman. There’s really only one line in the beginning that sums up what happened in the first The Angry Birds movie. If you haven’t seen it, you might be a little confused in the beginning. I’ll catch you up: birds vs. pigs. This sequel explores their relationship further and introduces a new type of villain.

There are a lot of cute visual and musical gags, although some of the humor falls flat. Many of the gags will go over your kid’s head and, in some cases, it’s a good thing. There is also a lot of fast-moving action. Act three went a bit scientific and technical, so young kids won’t quite understand what’s going on, but they’ll still be entertained. Parents may quickly become annoyed by all of the frantic yelling.

There’s a side story with three hatchlings that is pretty cute. Their little voices are super adorable. The plot wanders around and appears easily distracted. Some of the characters are more annoying than funny. There’s no need to race out to theaters to watch this movie. This is one of those movies that plays in the background at your house to keep the kids occupied while you try to pay your bills or mop the floor. You know what I mean?

Some themes within the movie you should be aware of before watching it with your family: