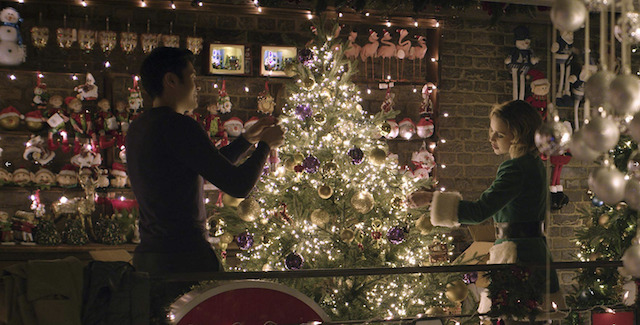 Kate, a continually unlucky woman, is leading a life that's ever so slightly falling apart. While working her job at a Christmas shop, Kate meets a man named Tom and as they get to know each other, she begins to rebuild her life.

Although it may be categorized as a romantic comedy, the strongest moments in Last Christmas are actually of the dramatic kind. That's not to say it's bereft of any comedy—though the humor is hit-or-miss—it’s during those scenes when the story surprises and the actors deliver their best work in the film.

Emilia Clarke and Henry Golding are perfect as the lead characters. Their shared chemistry and opposite personalities lead to the two having engaging conversations, building up a shared romance. Clarke, playing the cynical Kate, hooks you into her character instantly and you grow to root for her as she changes her life for the better. Even when the character is trying to be distant, Clarke still retains a charming demeanor. As for Golding, following Crazy Rich Asians, he seems to have nailed starring in romance films. Tom's the nice guy, the person who's supportive and encouraging, and Golding plays the character to a "T." Seeing the two actors together puts a smile on your face and you never doubt their connection.

As a comedy, the film's humor is a mixed bag. When the jokes work, they land huge laughs. However, these occasions aren't as frequent as I expected, or at least, not as the marketing would make it seem. Instead, a good portion of the comedy is dedicated to longwinded bits where actors preform bad improv, and this happens many times throughout the film. Similar to his Ghostbusters remake, director Paul Feig inserts comedic bits that grind the film's momentum to a halt, interrupting the flow of the story.

The narrative is engaging, but while important to the film's message, the secondary storylines felt underdeveloped. Kate and her family are immigrants and there's this subplot where immigrants in the UK are facing persecution. This leads to some touching moments, but that's all that becomes of it. Her family life also needed more development. The film focuses heavily on Kate reforging her relationship with her mother, but less so with her sister and father, who each have their own set of problems that are dealt with on a surface level. I imagine strengthening these areas would've improved the film altogether.

With these aforementioned elements, it would seem that Last Christmas is merely okay, right? Well, it would've been had the third act not delivered the whammy—forgive the pun—it did, and I mean that as a compliment. The final 10 minutes unveil a surprise that's simultaneously heartbreaking and heartwarming. I knew a small part of this twist going into the film, but I still did not expect the writers going as far as they did with this idea. Nevertheless, it still retained its intended effect. I was so shocked that my jaw dropped. All I will write about it is that screenwriters Emma Thompson and Bryony Kimmings clearly took the titular song to heart, ensuring that you will always think of this film every time you hear the song.

A so-so comedy, but a wholesome holiday and romance film, Last Christmas is delightful, surprising, and will likely become required viewing every Christmas season.

In regards to mature content, Last Christmas features some profanity, drinking, and sexual content. The S-word is used frequently as well as sexual talks and scenes suggesting promiscuity. The Lord's name is uttered as exclamations, not in the context of the Christmas holiday. Kate is an avid drinker and there are scenes with her at a bar and a scene where she bonds with her mom over taking shots in a market.

The overarching message of Last Christmas relates to loving one another unconditionally (see John 13:34). Regardless of your race, gender, nationality, or choice in a romantic partner, you should extend the same courtesy of love and kindness to everyone (see Elder Christofferson’s talk: “Abide in My Love”). Characters are encouraged to unplug from devices and engage with the real world.

Kate is a less-than-ideal role model at the start of the film. She sleeps around, is often snarky and rude, and in the words of her mother, “drinks like the pirate.” However, over the course of the film, she learns to care for those around her, repairing her life in the process. She does charity work for a homeless shelter, encourages her boss to pursue a crush, and reconnects with her family, notably her mother.

Tom is partially responsible for her change of heart as he teaches Kate many valuable life lessons. “Santa,” Kate’s boss, opts to see the good in her and even affords Kate a second chance after she makes a major mistake. When we first meet them, Kate’s family is dysfunctional, which is putting it lightly, but they come together in the end, overcoming their differences.

My name’s Dallin Curtis. I’m an aspiring film critic, a disciple of Jesus Christ, and I love to write about all things movies on my site named Dallin: The Film Fanatic. You can follow my work on Facebook.