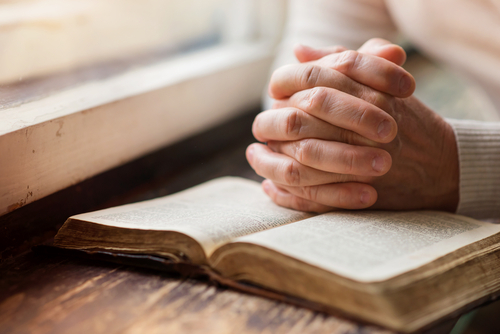 For many years I have been interested in the relationship between mental health and the gospel of Jesus Christ. I believe the gospel holds many keys to increasing happiness and decreasing fears. As I’ve started to write about my beliefs to a larger audience, I’ve come in contact with some individuals who often express skepticism about mental health issues being resolved through a deepened understanding of the gospel. They make comments such as:

- “Mental health issues are complex and cannot be reduced to just 'having more faith.'"

- “I’m so tired of people telling me that if I were more obedient, I wouldn’t be depressed/anxious/etc.”

- “You can’t just ‘pray away’ your mental health problems.”

Each of these concerns is valid. Emotional dysregulation is a complicated construct and will rarely resolve simply by just reading scriptures and saying prayers. Yet Satan, with his clever and sophisticated attacks, has created great deception on this topic. He is the master of half-truths and manipulation. He knows that it is very unlikely that serious mental health issues will be resolved by a single fight on the spiritual front. Consequently, he spreads the falsehood that spiritual interventions do not work. “You’re correct,” he whispers. “You can’t pray away your mental health problems. So why pray about them at all? Why waste your time with something that doesn’t work?” He is clever indeed because I have seen the effects of his lies in thousands of people who have lost hope and abandoned the spiritual front in their war against mental illness.

To continue the war metaphor, those who struggle with mental illness are being attacked on multiple fronts, including medically, physically, and spiritually. Their minds are attacked with incorrect thoughts and perceptions. Their brains are attacked with chemical deviations. Their hearts are attacked with desperate and awful emotions. And their spirits are attacked with fear and despair. You don’t have to be a four-star general to understand that if you fight a multiple-front battle on only one front, you are going to lose. Satan knows this as well, which is why he so strongly promotes the lie that a spiritual approach to mental health challenges is ineffective and should be abandoned. If he can get you to stop fighting on any given battlefront, he knows that your chances of failure increase dramatically.

Even though significant mental health concerns are not likely to be resolved by only using spiritual methods, why would we stop using such approaches? Just because prayer alone might not alleviate depression, why stop praying about it? Though fasting in and of itself might not cure anxiety, why stop fasting about it? In my life, I recognize there are times when my mental and emotional issues are going to get the better of me. I will lose many battles in my overall war to become a better person. But there is no way I’m going to lie down and let Satan prevail just because I lose on occasion. Even if there is no chance for me to overcome certain issues in my mortal life, I’m going to go down swinging. Fighting the good fight sometimes means throwing that last, weak punch even as you are falling to the ground in exhaustion. Fortunately for us, there is always another round and we can get up and fight again. Keeping the Savior in our corner may not be the only strategy to win the fight, but I believe it is the best one.

I believe we should fight our mental health issues on every front on which we are being attacked. I further believe that the spiritual front, although it is not the only front, is the most critical place to concentrate our forces. A recent epiphany confirmed this idea for me.

One of my favorite scriptures is in Doctrine and Covenants section six. It is counsel given to Oliver Cowdery that is applicable to us all. Verse 36 is simple and profound: “Look unto me in every thought; doubt not, fear not” (D&C 6:36). When I consider “doubt,” I think of such experiences as uncertainty, lack of confidence, and poor self-esteem—all conditions which can be associated with depression. When I consider “fear,” I think of issues such as worry, dread, and apprehension—all conditions which can be associated with anxiety. This unassuming verse might very well be a formula to help us manage anxiety and depression, particularly in arenas where these conditions attack us spiritually.

Looking in the Right Direction: Lot’s Wife and the Brass Serpent

I recently attended our stake conference, where Elder David A. Bednar presided. It was a remarkable experience. He made a profound statement that has stuck with me since I heard it. I paraphrase Elder Bednar’s quote: “The natural man looks to the past, but the man of Christ looks to the future.” As noted in D&C 6:36, the Savior’s counsel is to look unto Him in every thought. Let’s consider two scriptural examples that illustrate the significance of keeping a proper perspective as we seek to focus our thoughts on Jesus Christ.

Lot’s family lived in Sodom and Gomorrah, an ancient biblical city so wicked that the Lord vowed to destroy it. Lot and his family were warned of the destruction and given time to flee. Angels gave the following direction and warning to Lot’s family: “Escape for thy life; look not behind thee, neither stay thou in all the plain; escape to the mountain, lest thou be consumed” (Genesis 19:17). In other words, “Get out, keep moving, don’t take breaks, and don’t look back.” Almost all of Lot’s family were obedient to the angelic commands. They left the city, they kept moving, but Lot’s wife looked back and was turned into a pillar of salt. I don’t know if her consequence was literal or allegorical, but the implications are clear. For Lot and his family, Sodom and Gomorrah was old news at that point; it was a part of their lives that they were to leave behind and never revisit. Whatever mistakes, drama, or challenges they had while they were there, it was time to leave them in the past and move on. Whether “looking back” represented a longing for past experiences, wallowing in old regrets, or digging up former sins, the Lord’s counsel was unmistakable: Don’t look back.

In contrast, many years later, the children of Israel were being led by Moses through the desert. Their chronic disobedience and murmuring are legendary. On a particularly bad day, the people were complaining about the manna raining from heaven six days a week. In response, the Lord sent “fiery serpents” among them, which bit the people (see Numbers 21:5-6). Moses was commanded to make a brass serpent and put it on a pole, then command the people to look to the serpent to be healed of the poisonous snake bites. Some looked in faith and were healed; others refused to look and perished. Centuries later, Nephi commented on the lack of diligence of those Israelites who died from the serpents’ attack: “Because of the simpleness of the way, or the easiness of it, there were many who perished” (1 Nephi 17:41). We know the brazen serpent was a representation of the Savior of the world. Whether brass snakes have any native curing power or not, the lesson is clear: In moments of trouble, look to the Savior.

Going back to Doctrine and Covenants 6:36, notice the phrasing of the Savior’s command: “Look unto me in every thought; doubt not, fear not.” I think there is wisdom in the order in which these commandments are presented. It doesn’t say, “Address your doubts and fears first, then fix your focus on me.” On the contrary, the admonition is to focus on the Savior first, then address other issues. I reiterate that there is no simple solution to most mental health concerns. However, perhaps the Lord is suggesting that if we first turn our thoughts to Him, consistently and faithfully, we might be in a better position to manage our doubts and our fears. As we partake of the sacrament with a broken heart and contrite spirit, we are promised that we will always have His Spirit to be with us if we always remember Him and strive to keep His commandments. Having the Spirit with us will certainly be an effective tool in fighting the spiritual front of our mental health war.

I am reminded of the scene in which Captain Moroni raises the title of liberty. He was exasperated with the traitor Amalickiah and wanted to reaffirm his own commitment to righteousness. After he tore his coat and wrote the memorable phrase “In memory of our God, our religion, and freedom, and our peace, our wives, and our children” (Alma 46:12), he did something remarkable. He put on all of his armor, even down to his shield. Fully dressed in battle gear—fully protected against the physical attacks of his enemies—Captain Moroni then bowed himself to the ground and begged God to preserve his people and their noble cause (see Alma 46:13-17). Before heading to the battlefront to defend his freedom, Captain Moroni sought the only protection that is guaranteed through faithful obedience. Our Father in Heaven will never abandon those who reach out to Him in faith and righteousness. Although His timing is often mysterious and not necessarily in harmony with ours, His assistance is an absolute certainty.

I’m not suggesting you go fight your mental health battles simply on the spiritual front. The other fronts need just as much attention and require preparation. Like Captain Moroni readying for battle, you should sharpen your swords, polish your armor, and do every other needful thing. Seek competent medical advice. Talk to a trusted professional. Combat your negative thinking on a daily basis. But before all of that, like Captain Moroni, seek for the blessing and protection of Almighty God. Keep your covenants. Serve others. Study and ponder the scriptures. Pray sincerely and often. May the Lord bless you as you turn your focus to Him and reach out for His help, first and foremost.