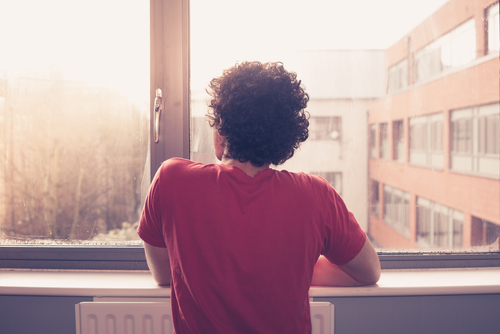 Latter-day Saint Psychologist: The Lord’s Role vs. Your Role in Anxiety Management

When asked to return to Jerusalem and retrieve the plates of brass, Nephi responded in faith that he would “go and do the things which the Lord hath commanded” (1 Nephi 3:7). He later learned from experience that the Lord was true to His word, providing divine assistance to help him accomplish the task. As I talk with Latter-day Saints who struggle with anxiety or other mental health issues, they often look to the example of Nephi. If the Lord wants me to overcome anxiety, He will provide a way, they reason. But what is the way? How much am I supposed to do and how much will He help? It is a very legitimate question. We know the Lord will bless us with divine assistance, but He also insists we do our part. So, what is our part? Coincidentally, Nephi’s own life experience also answers that question.

► You'll also be interested: Latter-day Saint Psychologist: Why You Might Still Struggle with Anxiety (or Other Mental Health Issues) Despite Your Best Efforts

After Lehi and his family arrived at Bountiful, they rejoiced in their lovely surroundings. They no longer wandered in a barren desert but were at a beautiful beach teeming with delicious fruit. Having a great love for the beach myself, I can imagine that many in Lehi’s company probably wanted to stay there indefinitely. Yet the Lord had other plans. He informed Nephi that their final destination was the promised land, far across the sea, and Nephi needed to construct a ship to carry them there. “And it came to pass that the Lord spake unto me, saying: Thou shalt construct a ship, after the manner which I shall show thee, that I may carry thy people across these waters” (1 Nephi 17:8). I believe this simple statement contains profound counsel about how we work together with the Lord to overcome challenges.

With any personal challenge, we all yearn for the day when we’ll find resolution. We want anxiety to cease. We want depression to relent. We want the Savior’s promise to become a reality in our lives that “in me ye might have peace” (John 16:33). As we stand on the shores of our difficulties, we view the massive ocean that stands between us and the promised land of our healthier and more stable selves. How do we get across that ocean? While such a journey is unique to each individual who takes it, there are guiding principles that are similar for all.

You Have to Do the Work (“Thou Shalt Construct a Ship”)

The Lord’s first statement to Nephi is an invitation to act. “Thou shalt construct a ship” (1 Nephi 17:8). It doesn’t say “I’ll provide a ship,” or “I’ll build half the ship,” or “Someone else will give you a ship.” The requirement was clear; Nephi was to build the vessel. This is the first key in overcoming anxiety or other mental health issues—we have to do the work. If we are not sufficiently motivated to change to the point that we will actually do the heavy lifting, then the process is over before it begins. I’ve worked with many clients who view themselves as hapless victims of their circumstances. While it is true that the behaviors of others absolutely affect our lives, it is equally true that we have the greatest power to change our situation, especially our emotional experience. Many times, we are so emotionally compromised that we cannot escape the situation alone. Satan would have us remain inert, lamenting our condition and sitting helplessly along the side of the road. But if we find ourselves in such a predicament, we are not powerless to act. We have to do our part. Imagine you fall into a hole that is too deep to exit and there’s nothing you can do to escape on your own. Even if a friend comes by and lowers a ladder into the hole, you will remain stuck until you act and climb the ladder. So it is with the gospel. As you exercise your agency in righteousness, you qualify for the Lord’s blessing and assistance (a ladder, you might say). But you still have to do the work.

► You'll also be interested: Latter-day Saint Psychologist: Why I Wish My Nephew in a Wheelchair Could Be in All My Client Interviews

After the Lord commanded Nephi to build the ship, He told him the craft would be constructed “after the manner which I shall show thee” (1 Nephi 17:8). Again, let’s consider what the Lord did not say. He didn’t say, “Nephi, I need you to build a ship. It can be any type you want. Go ahead and make your plans, don’t consult me at all, and then show me what you’ve accomplished.” The Lord specifically told Nephi that He would be the architect of the ship’s design. How many times do we seek to solve life’s problems using our own strategies, without seeking heavenly direction? And how many times do we find such strategies to be flawed or ineffective? I’m sure the Lord would prefer to be our first source of information, leaving Google in a distant second. Of course, we need to do our part (remember, you have to do the work), but we should seek heavenly guidance to know the correct plan of action or for help seeing the potential flaws in our limited-vision plan. This strategy requires great humility, recognizing that we don’t have all the answers.

► You'll also like: Latter-day Saint Psychologist: When Trials Seem to Come at the Worst Times

Nephi’s description of how the Lord revealed the method for constructing the boat is even more instructive: “And the Lord did show me from time to time after what manner I should work the timbers of the ship. Now I, Nephi, did not work the timbers after the manner which was learned by men, neither did I build the ship after the manner of men; but I did build it after the manner which the Lord had shown unto me; wherefore, it was not after the manner of men. And I, Nephi, did go into the mount oft, and I did pray oft unto the Lord; wherefore the Lord showed unto me great things” (1 Nephi 18: 1–3, emphasis added). Sometimes we expect the Lord to give us the whole plan right now. In Nephi’s case, the Lord revealed step by step how the ship was to be constructed, requiring Nephi to seek ongoing revelation on how to proceed. As you seek solutions to anxiety and other challenges, the Lord is unlikely to give you the whole solution after your first prayer. Similar to Nephi, He will probably give you line up line, precept upon precept and require you to seek His direction on a daily basis. Such a strategy not only results in getting a solid plan to manage our trials, but it increases our humility and capacity to receive revelation. It’s truly a win-win situation. You have to seek revelation.

Nephi and his brothers worked long and hard to complete the boat. They followed heavenly guidance in the construction process. As they prepared to put out to sea, there was one more subtle but important condition from the Lord’s initial command. The reason Nephi needed to build a boat, according to the Lord’s design, was so “that I [the Lord] may carry these people across these waters” (1 Nephi 17:8). Despite it being a very small detail, I think there is a significant difference between that statement and a statement such as “so that this boat can carry you across these waters” or “so that you can sail this boat across these waters.” While the latter two statements refer to the power of man, the initial statement clearly indicates that God would be in charge of transporting Lehi’s family from Bountiful to the promised land. We know the Liahona served as a compass to provide direction from the Lord while they were on the ship. When Laman and Lemuel rebelled on the waters, taking command of the ship, disaster struck. Without a faithful person at the helm, a tremendous storm arose, and their forward progress stopped for three days. It wasn’t until they finally untied Nephi and he resumed guiding the ship that the storm ceased and their journey continued forward.

There is great wisdom in this analogy. Many of you are currently crossing the sea of your troubles and difficulties. You’ve followed directions to build the ship according to the Lord’s commands. Now you traverse the long and difficult process of change that will take you to greater peace and happiness. What is your strategy? Do you faithfully hold to the ship’s wheel, seeking constant direction on where to go? Do you grip the wheel tightly yet refuse any advice or counsel, insisting on taking the ship in the direction you know best? Have you let go of the wheel entirely, leaving it to others to steer or to be tossed about by the winds and waves? How you proceed on your journey is critical to your ultimate success. Like Nephi, you have to steer. But also like Nephi, you have to follow the Lord’s direction. So often we doubt the Lord’s commands, failing to see the wisdom in His gentle guidance. He invites us to proceed in a certain direction, and we say “That doesn’t sound right. I’m sure that’s the wrong way. I mean, I asked for relief from anxiety and now He wants me to give a talk in sacrament meeting? How in the world will that help?” Because of agency, we are free to choose our course across the sea of difficulties. Wisdom encourages us to follow His direction. Pride demands we follow our own path. I promise that the safest, most secure and growth-promoting route is the one He provides. You have to let the Lord navigate.

► You'll also like: Latter-day Saint Psychologist: 3 Words that Can Carry You Through Mental and Physical Suffering

As Lehi’s family arrived safely in the promised land, there is no doubt their joy and gratitude were greatly enhanced considering the difficulties they endured to get there. It is no different with issues of anxiety, depression, or whatever challenge you struggle with. As you do your part, seek ongoing guidance, and let the Lord chart your course, you will ultimately find resolution to your troubles. Quite frankly, the greater the difficulty in the trial, the greater the appreciation you’ll experience. God bless us all in our journey back to our heavenly home.