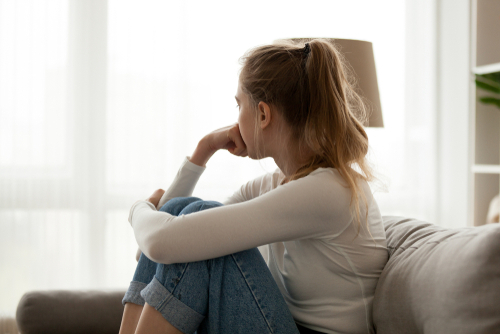 As I listened to the women’s session of the October 2019 general conference, my focus was on a number of things. The talks were inspiring. I was looking forward to the additional information and changes to the Young Women program that had been promised in the previous session. My thoughts drifted from one to the other. Then my mind snapped to attention: Did Sister Aburto just say her father committed suicide? I listened intently to confirm that what I thought I heard was accurate. Indeed, it was true. Quite frankly, it was a bit of a shock. In over 40 years of general conference sessions I’d listened to, I cannot ever recall a brother or sister sharing something so intensely personal from that pulpit. I pondered, what are people going to think? Perhaps there would be some Church members that would think Sister Aburto had overshared, or that general conference might not be the best venue for such a personal experience. My thoughts were, Thank goodness; it’s about time.

I love Sister Aburto’s clear understanding of the gospel. I was highly impressed with her first talk in the April 2018 general conference where she compared us all to a kaleidoscope of butterflies, trying to find our collective way back to our heavenly home. There was a raw sincerity in her voice. I thought to myself, this is someone who really gets it. My initial estimations of her character were dramatically confirmed in her recent talk. I can’t imagine the courage it would take to stand in the Conference Center, prophets and apostles behind you, millions of Latter-day Saints before you, and then talk about one of the most desperate experiences of your life. I truly admire her bravery and determination. I also think her remarks have the potential to be particularly helpful to many who currently misunderstand the role of weakness in our lives.

Nobody wants to be considered as weak. Some time ago I was at our children’s high school gym and noticed a large board with names. Upon further investigation, I learned it was a list of those individuals who held track and field records. On each line, there was a track and field event, a name, and then a very impressive number that represented excellence in that particular event. Some of these records had stood for many years. These were some of the best athletes the school had ever produced. The board was positioned over a large glass case that contained many trophies and awards for first-place finishes, regional and state championships, and other significant accomplishments. What I did not see was a board that listed mediocre times, fifth-place finishes, or repeated attempts at success that were only met with failure after failure. They don’t make boards and trophy cases for such things.

Yet in my experience, life is full of failure, weakness, struggle, and disappointment. Thankfully we have periodic triumphs. Some even get their name on the leaderboard for a time. But most days, we are in the trenches, trying to do our best, solidly in the middle of the pack and just hoping to finish the race. We look at the leaderboard, hang our heads in disappointment, and think, I’ll never be up there. Satan capitalizes on our discouragement and tries to convince us to quit trying. “Why even continue to race,” he chides, “when you know you cannot win? You’ll never be on the board. You’ll never take home a trophy. You know that as well as I do; you’re just not good enough. Drop out now while you still have a shred of pride and dignity.” His rationale is convincing, and we start to slow our pace, looking for a convenient spot to break from the crowd and stop running. Then amazing women like Sister Aburto get up in front of an audience of millions and shred Lucifer’s logic to ribbons.

Sister Aburto’s remarks were amazing and incredibly well presented. What I found even more remarkable was the subtext. What she did not explicitly say, but what the world hopefully heard, was, “It’s okay to talk about weakness. It’s okay to share personal struggles. We all have a history of challenges, and we don’t need to make this a secret.” These messages are sorely needed in a world of photo filters and glamorous social media posts. So many work so hard to hide every blemish, flaw, and disappointment that we start to believe no one has any trials or difficulties except ourselves. We feel lonely, odd, and alienated. Yet the truth is that in our flaws, we are in the company of some of the greatest individuals in the world.

Weakness Is Not Sinfulness

We tend to shy away from weakness, somehow believing it is a sign of second-rate valiance or the product of poor decisions on our part. That is fundamentally untrue. While we often experience consequences due to sinful behavior, the fact that we are weak is not sinful. It’s not flawed. The truth is, weakness is a heavenly gift that is the first step in becoming strong. Moroni, son of Mormon, lived in a desperate time. His father and friends were gone. His entire people had been slaughtered. He fled from place to place, actively escaping Lamanite capture while trying to find time to complete his father’s inspired record. I imagine there were days he felt unequal to the task. As he was abridging the Jaredite record, he penned his concerns, stating that he was a poor writer and felt that future Gentiles would think that his efforts were a joke. The Lord responded with boldness and assurance, teaching Moroni the purpose of his weakness: “And if men come unto me I will show unto them their weakness. I give unto men weakness that they may be humble; and my grace is sufficient for all men that humble themselves before me; for if they humble themselves before me, and have faith in me, then will I make weak things become strong unto them” (Ether 12:27).

Most of us are familiar with that verse. We love it and often refer to it as the “weakness becomes strength” scripture. That’s the end of the scripture, but we often gloss over the first part, where we learn several additional key points. The first point is, if we actually develop the strength to go to God for help, then He is going to show us our weakness. He’ll shine a big, bright spotlight on it and say, “My amazing child, if you didn’t know it already, you are weak. Critically weak. And it’s important for you to know that.” As we try to figure out whether we should be thankful for such a response, He teaches the second point. Not only are we weak but our weakness also comes from Him. He adds, “Remember when I showed you how weak you are? I also wanted to mention that I made you that way. Your weakness comes from me.” As we reel from these revelations, He patiently continues His instruction with a third point. “I need you to be humble. Humility is the only way you’ll learn to trust me enough to follow my counsel, thus coming back to your true home. Your weakness will encourage your choice to be humble.” Boy, that’s the truth. When I’m riding the crest of the wave, I don’t always feel the need to reach out for assistance. But when I’m being slammed on the hard sand, I look for the first person to help lift me up. After reminding us of the purpose of humility, in His true loving and compassionate way, He teaches that these liabilities called weaknesses are only temporary for those who follow His plan. “Don’t worry, little one,” He reminds us. “Your weakness is just there to help you progress. If you’ll accept your weakness, be truly humble, and have faith in my Son, then we’ll transform that weakness into a strength. I love you. Please don’t leave me out of the process.”

In Come, Follow Me for Individuals and Families, we recently studied this amazing teaching of Paul: “I have learned, in whatsoever state I am, therewith to be content. I know both how to be abased, and I know how to abound: everywhere and in all things I am instructed both to be full and to be hungry, both to abound and to suffer need. I can do all things through Christ which strengtheneth me” (Philippians 4:11-13). I don’t believe Paul’s contentment came as a result of him independently overcoming all his trials and weakness. I believe his contentment came because he faced his weakness, locked arms with the Savior, and pressed forward with hope, determination, and obedience. He openly acknowledged his weakness and understood that heavenly help was his best recourse. How I wish we all could follow the examples of Paul and Sister Aburto! Instead of hiding from our weakness, airbrushing it away into the digital ether, can we not embrace it for the heavenly gift it is? I’m not suggesting we have a regularly airing of dirty laundry, but surely we could improve in our ability to be more authentic and take appropriate pride in those fifth-place finishes, especially when that is our level best.

When Sister Aburto told her tragic story, I think there were tens of thousands of Saints around the globe who breathed a collective sigh of relief. They felt less alone. They felt understood. They felt hope like they hadn’t before. They felt that if she could get through such trials, so could they. How many more sighs of relief could we affect if we all took the risk to be a little more human, recognized our weakness without giving up on ourselves in discouragement, and reached out to lift up other low-hanging hands? Weakness is not wrong. It is not bad, sinful, or broken. It is the first step in a heavenly plan to help us claim exaltation as the rightful heirs of our amazing Heavenly Parents by learning to come to Them for help with our weaknesses. May we all have the courage and strength to accept God’s will, humble ourselves, and join hands with Him as we continue on this most amazing and difficult journey.