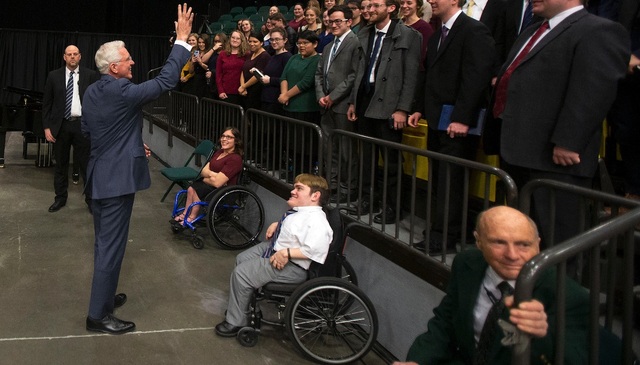 Latter-day Saint Psychologist: Why I Wish My Nephew in a Wheelchair Could Be in All My Client Interviews

This article is written by Dr. David T. Morgan, who writes for LDS Living under the title of “Latter-day Saint Psychologist.” He has a special connection with the person featured in this post.

If you watched the recent Worldwide Devotional for Young Adults with Elder D. Todd Christofferson and his wife, Sister Kathy Christofferson, you experienced a real treat. In addition to the talks, which were amazing and inspiring, if you continued watching after the closing prayer, you saw Elder Christofferson quickly leave the stage to go over to the institute choir that had performed at the event. He waved to them while praising their excellent performance. You may have also noticed he stood directly in front of a choir member in a wheelchair. That man stared up at the apostle with admiration and respect, subtly trying to get his attention. His efforts were successful, as Elder Christofferson looked down, saw the man, and shook his hand. The man in the wheelchair is my nephew. Here is some of his story.

In 1994, my sister and her husband climbed into their car with great anticipation. She was expecting her first child and the time had arrived for his birth. They were filled with all the hope, anxiety and disorientation that is typical of new parents. At 3:45 a.m., Colton Rhodri Purcell was born. His parents were thrilled and relieved, but their contentment was short-lived. Around 7:30 a.m., their doctor informed them that something was wrong with Colton’s legs. Subsequent x-rays revealed abnormalities throughout his entire infant body. Colton’s parents were encouraged to make an appointment with a local children’s hospital to get a conclusive diagnosis, and they were sent home shortly thereafter. 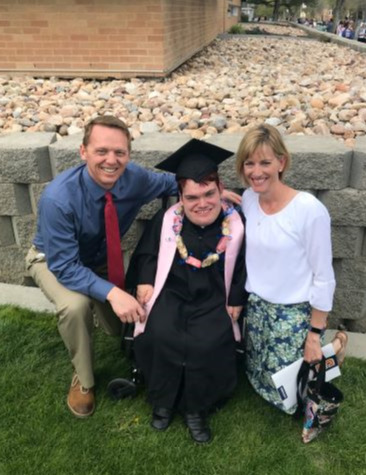 What was wrong? Colton’s parents were confused and concerned as they drove home, only to discover another emergency as they arrived at their apartment. As they retrieved Colton from his car seat, they saw he had stopped breathing. Frantically, these brand-new parents called 911 and Colton was taken back to the hospital by ambulance, where he spent a week recovering. One month later, a geneticist contacted Colton’s parents to deliver the final diagnosis. Colton had Metatropic Dysplasia—an extremely rare form of dwarfism that manifests in a long trunk and short limbs with a prevalence of less than one in one million. Almost inexplicably, the doctors asked my sister and brother-in-law if they wanted to keep Colton or put him up for adoption. With faith and determination, they replied they would absolutely keep him and raise him to the best of their abilities. I can’t imagine life without my oldest nephew. He has brought happiness and inspiration to all who know him.

► You'll also like: Latter-day Saint Psychologist: 3 Words That Can Carry You Through Mental and Physical Suffering

Fast forward 26 years, and you’ll find Colton engaged in any number of activities. One would think that having been born with a considerably disabling genetic condition that is literally a one in a million shot, he might have relegated himself to a life of average pursuits. But Colton has never been satisfied with average, and his parents have encouraged him in his musical and other skills the same way they have encouraged his siblings. “My disability includes symptoms that could easily prohibit me from accomplishing my dreams,” Colton shares. “I can’t reach my arms above my head, my hands are pretty small, and I stand at 3’ 11”. My disability also makes it difficult to walk anywhere without a wheelchair. Unlike most people in wheelchairs, I move my wheelchair by pulling it forward with my feet on the ground. I also can’t rotate my neck as much as most people can. I could have chosen to let these things hold me back from doing what I wanted to do, but I chose not to."

Though he first started out studying theater in college, Colton is an amazing pianist who composes original pieces and recently graduated from Snow College with a Bachelor of Music, emphasizing in commercial music. “During the first semester of my freshman year, I pursued a degree in theatre,” Colton says. “While I was on that track, it didn’t feel like theatre was for me. I felt much better when I was playing the piano than I ever did when I was portraying a character on stage.”

Pursuing a Passion for the Piano

Despite his love of music and the lifetime he has spent learning and practicing the piano, pursuing this path still has not been easy for Colton. He explains, “When I look at a piano piece, I have to alter fingering so I can play the piece to the best of my ability. I also have to sit closer to the piano due to the short length of my arms. Because of my limited neck motion, it is hard for me to read music on the piano. To work around this, I have had to memorize music much quicker than most musicians. It is more difficult for me to play piano than most other pianists, but as I continued to practice, I saw improvement and success.” In my work as a psychologist, I have spent hours trying to teach clients the positive outlook that Colton has developed his entire life—seeing a challenge or setting a goal and then find a way around it instead of giving up in despair.

► You'll also like: Latter-day Saint Psychologist: 3 Ways to Change Your Thinking and Increase Your Happiness 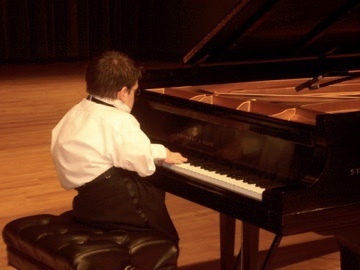 One such challenging musical goal Colton faced recently was to sing in the institute choir performing for the recent Worldwide Devotional for Young Adults. Though Colton felt prompted to join the choir, he knew the biggest difficulty he would have would be getting to rehearsals. “I knew it would be hard for me to get to rehearsals, but I felt that [going] would be a great opportunity for me to increase my sensitivity to the Spirit. I got a lot of help from friends who gave me rides. I couldn’t have done it without them,” Colton says. "When I began attending the rehearsals . . . I found that I was able to receive more spiritual guidance as I attended rehearsal after rehearsal. There were times when I felt too tired to attend, but I knew going would make me feel good. I knew that it was the Spirit. My spiritual sensitivity has become much more of a priority for me in adulthood than it ever has been before.”

But Colton’s experience with the Spirit and his determination to do hard things didn’t stop with choir rehearsals. “While I was listening to [Elder Christofferson’s] address, there were many thoughts coming to my mind,” Colton says. “I have many friends who aren’t members of the Church. Some of them find us to be intolerant and stubborn simply because we don’t change our beliefs to meet what society thinks. I had the impression that eventually, I will have to stand up for my faith. Because of that, I understand that I may lose some of my friends. They may turn on me for what I believe in, but I know what I need to do. I’ll have no regrets for standing up for what I know to be true.” 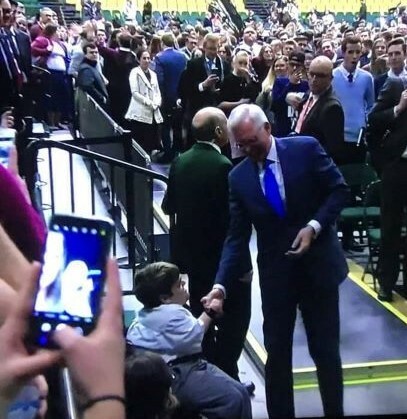 “It was really neat that [Elder Christofferson] liked what the choir did for the devotional. I felt like the presence of the Spirit was so strong because of the music that we sang and because of the talk that he gave.” He adds, “I didn’t expect to feel anything profound from that experience with him [shaking my hand], but I did. It was really amazing. I can’t think of any word to describe it other than amazing. I guess that’s what happens when you shake the hand of an apostle.”

Colton has exceeded expectations in almost every way, making difficult choices and pushing himself on a daily basis. Whether it’s playing a Beethoven piano sonata or making his favorite dinner of chicken crescents, Colton has risen above liabilities to reach lofty goals.

► You'll also like: Latter-day Saint Psychologist: Changing Your View of Failure Will Increase Your Happiness

“Being born with a disability like mine has given me a more experienced perspective on my challenges,” Colton says. “I’ve found that you can always be happy no matter what your circumstances may look like. Your disability can only hold you back from happiness as much as you let it. Disabilities are just a different kind of trial. They can’t hold you back from being happy if you can find something to be happy about. There are always ways that you can find happiness. It might be hard to find at times, but I promise that the rewards for the effort of looking for happiness are far greater than the struggle.” 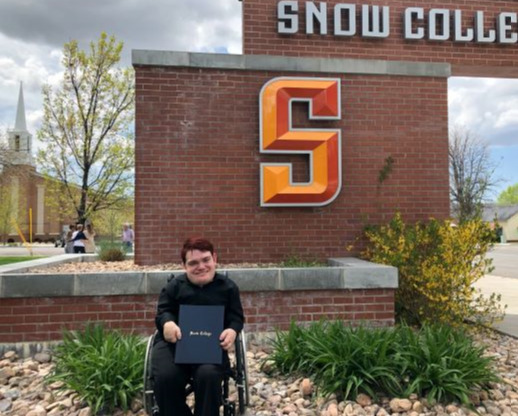 Perhaps now you can see why I’m so proud of my nephew. As a psychologist, I have daily experiences with people who feel they are limited due to emotional problems. In so many cases, they cease to function effectively as they feel constrained by their condition. I wish I had Colton with me in every one of those interviews. I’d have him play a beautiful piano piece for them with fingers that are not remotely suited for such lovely music. I’d have him tell stories about scooting his wheelchair from class to class in college, defying expectations on his way to becoming a college graduate. With his infectious smile, I’d have him tell them about how you can find happiness in anything you do as long as you look for it. Everyone needs a Colton in their lives, and I’m eternally grateful that I have the original.

Lead image and all other images courtesy of Dr. David T. Morgan