"What do you want to be?" a middle-aged woman asked from behind a desk.

Standing at the front of a long line of fellow middle-school students, 14-year-old Bronson Evertsen froze at the question.

"I haven't really thought about that yet," Bronson admitted.

It wasn't exactly the wrong answer. At least it was truthful. But Bronson's fellow students looked at him in disbelief and the woman, who was there to assign Bronson to the right high school, stared.

In Italy, asking a middle-school student to choose a career is mandatory. But before that awkward moment standing in line and having no idea what he wanted to be, Bronson didn't know he was supposed to already have his future career mapped out.

That's because Bronson wasn't Italian. He was an American living in Italy. And his answer to this woman's question would be a life-changing journey.

When 11-year-old Bronson first stepped foot on Italian soil, he thought he already knew what to expect.

In America, where he had lived his whole life up to that point, he had seen movies where the Coliseum and the David loomed, small Italian villas dotted the picturesque country, and the pizzas were excellent.

But not all of that was true, as Bronson quickly learned.

After finding out their new home in Italy was a hoax, Bronson, his parents, and five siblings scrambled to find hotel rooms or vacation homes that would accommodate them. Not exactly the Italian villas he had hoped for. 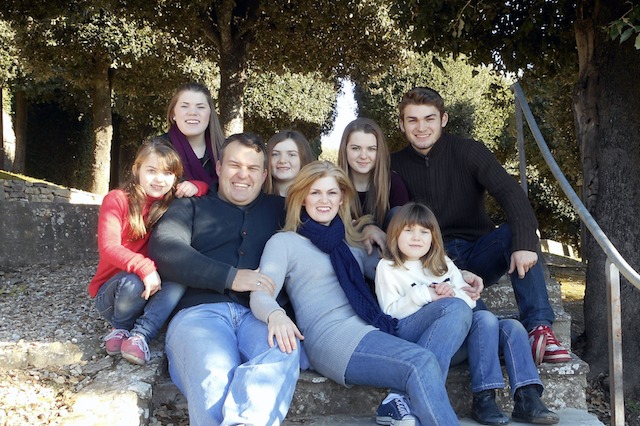 Bronson and his family were off to a rough start. "But the food was a lot better than expected," Bronson says with a laugh.

Almost 10 years ago, Bronson's parents, Heather and Dave Evertsen, felt a strong prompting to move their family to Italy after Dave was hired for a job in Iraq.

Not wanting to make such a life-changing decision without any input from their children, the couple turned the question over to their family.

"We were all in a family home evening and asked everyone to write down the place they would most like to live," Heather remembers. "Five out of the eight of us wrote down Italy."

For 11-year-old Bronson, the initial culture shock coupled with the fact that he didn't speak a lick of Italian was overwhelming.

At first, Bronson would tack on an "'o" and "i" at the end of English words in the hopes that he would at least sound Italian. This didn't always work.

But Bronson's struggle with Italian was just beginning.

"They Planned to Fail Him"

For a year, Bronson and his family went from vacation home to hotel to vacation home until finally, they came across a home where they could live longer than a few weeks at a time.

At 12, Bronson entered Italian public school at a critical age for Italian students.

"[The third year of] middle school finishes with a very difficult exam that has a panel interrogation and the kids spend [three] years of school preparing for it," Heather writes. "So, his first week of school, the staff told him that they planned to fail him."

With news like that it would be difficult not to feel discouraged but for Bronson it was motivation. For the next two years, he worked tirelessly to master Italian. For two years, Bronson spent every free moment with a tutor learning Italian. He still remembers the day he knew he had become fluent.

"I was in seminary with friends and they would sometimes joke, lovingly, about me in Italian," Bronson remembers. "I would laugh along even though I didn't know what they were talking about. And then, one day, I laughed and responded with a joke of my own, and they were like, 'What? You understood us?'" Bronson says.

Just when it looked like Bronson's hard work learning Italian had paid off, he was blindsided by the fact he had to choose a career at 14 to get into high school and college.

"When I first came here, I wasn't thinking about what man I wanted to become," Bronson says. "I started asking common questions like, 'What am I doing here? Why did I leave all my friends?'"

But after receiving his patriarchal blessing, Bronson says he began to realize little by little where his life was going.

"When I first got here, I didn't have a broad understanding of Italian or of myself," Bronson says. "But my knowledge grew. My testimony grew. My purpose grew. It taught me a very special lesson as I began to realize how everything at the beginning is ambiguous and we slowly realize the reasons for why we're here and why we go through the things we go through."

Fortunately, Bronson's school allowed him some extra time to consider what he wanted to be and what high school he would like to attend. Ultimately, Bronson had two choices.

Previously, Bronson had dabbled in small doodles that evolved into realistic sketches as he got older, but nothing suggested that he had more than a passing interest in art.

But as he began taking courses, he found a talent for sculpting not even his own mother knew he had. 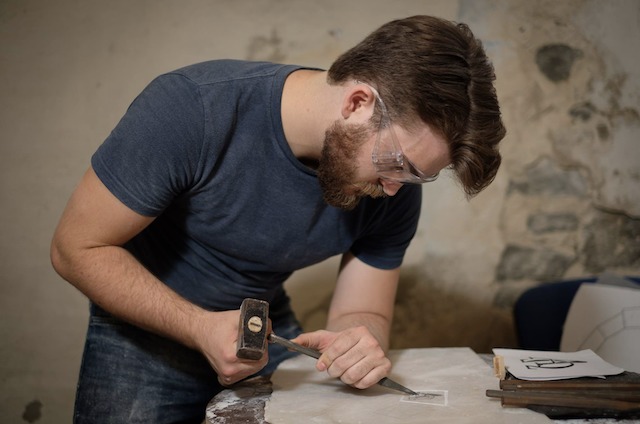 And after Bronson was accepted into a private club for track things looked like they might be getting better with both his high school coursework and his social life.

But as the only Latter-day Saint in his school of 3,300 and the sole young man in his ward, Bronson struggled to find friends who supported his standards. For five years, Bronson was also the only one in his ward's Young Men program.

Whenever he was invited to an after-school activity, it was usually to go bar hopping or clubbing. Smoking was also popular with his peers. Because Bronson wouldn't participate in these activities, he often spent his time alone.

But while his social life wasn't ideal, Bronson's skills in sculpting were flourishing. That's not to say it wasn't easy. All-nighters. Intense exams based on interrogation style. Chipping away at stone for months at a time. But, in the end, Bronson graduated from high school with the equivalent of an associate's degree in sculpting, painting, and history of art. 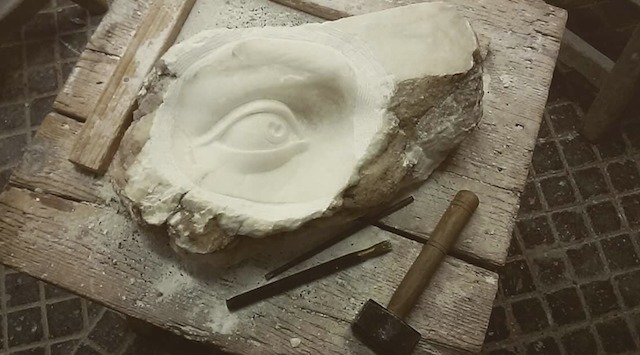 And when construction began on the Rome Italy Temple, Bronson helped Heather direct tour groups to see Carrara, Italy, where the marble came from for the 12 apostle statues in the visitors' center, along with Michelangelo's David.

Beginning in Carrara, Bronson walked visitors through the entire process from start to finish of how the marble was gathered, cut by machines to replicate Bertel Thorvaldsen's 12 apostles and Christus statue, and how the sculptors carefully added in the final details of each statue. 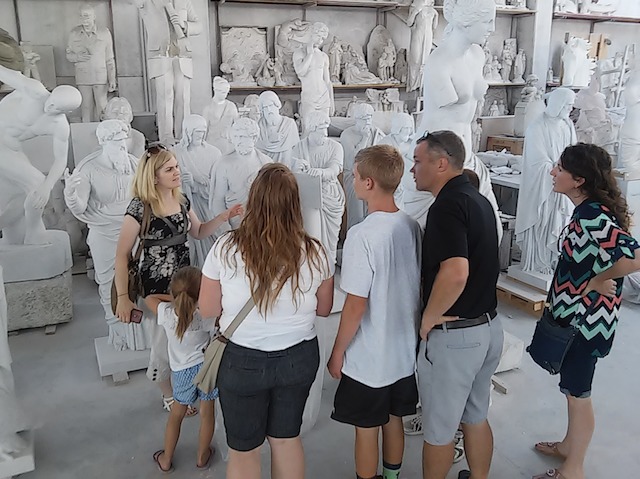 "We've met people who have run big tours, Church tours all over the world who have come and said that was the most moving, meaningful experience they've ever had on a vacation," Dave says. "When they go up to see the David, go see the Piata, and they see all these famous works and they have a totally different appreciation for how it is done."

Along the way, Bronson met fellow Latter-day Saint artist Tom Holdman. Holdman, whose stained glass windows are featured in temples across the world, was working on a stained glass window of the parables of Christ for the Rome Temple Vistors' Center when he met Bronson. Together, they discussed different materials used in the stained glass window in the visitors' center, and Bronson was able to contribute to the project by sculpting pieces of Italian alabaster to fit into the masterpiece.

For Bronson, who was nearing the jump from school to the professional world, the experience of working with Holdman was particularly valuable.

"It was a cool experience of being in a professional workplace," Bronson says. "He [Holdman] helped mentor me on the work side of the art business side."

Inspired by the tours, Bronson sculpted his own Rome temple miniatures from the white marble of the Carrara quarries.

"I'm so lucky to have this opportunity to make these pieces after being exposed to different parts of the process, even if I played a small part in it," Bronson says.

Currently, Bronson is looking forward to the dedication of the Rome Italy Temple set for March 10, 2019. He says in his family's kitchen there's a chart with how many copies of the Book of Mormon, missionary discussions, and invitations to attend church they've given throughout the years.

And now, the family has secured three busses to bring at least 200 non-members to the Rome temple open house and started a GoFundMe page to help fund their missionary efforts.

"The Rome Temple is 2.5 hours away," the family writes on their GoFundMe page. "It will take five separate buses to get them there—all of our friends together—so the missionaries can speak to our friends. Imagine . . . being a missionary on a bus full of non-members beading to the temple. How cool is that?"

Though Bronson had no idea what was in store from him when he came to Italy and the hardships he would face, he says now he sees how his experiences have come together to give him a life that wouldn't have been possible if he had remained in America.

"It's not a coincidence that I'm here," Bronson says. "It hasn't always been easy by any means and it still isn't at times, but I know that in the grand scheme of things, God has a plan for all of us, be it small, be it grand. And when things get hard and I find obstacles in my way, I remember Doctrine and Covenants 123:7–9, which basically reminds me that Heavenly Father never abandons us in our hardships and sometimes He waits and watches from above for us to pull through because He knows that we can get through it and that He doesn't give us trials we cannot overcome. I'm here and the career I have and the people I've met were not a coincidence. Everything has led up to help me start my life as an artist."

All images courtesy the Evertsen family