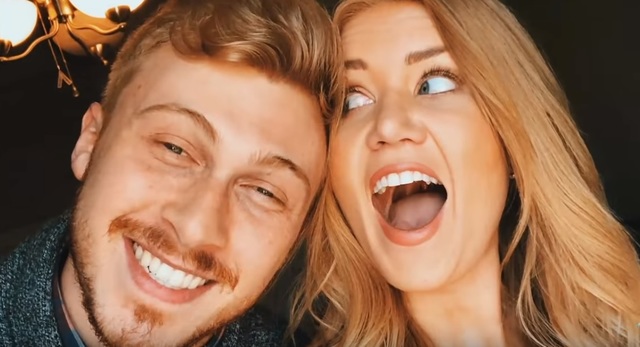 At 2 a.m. one cold December morning, Matt Zavoral was among the last students in BYU's Harold B. Lee Library in the wee hours before finals week began. That's when he had an epiphany—and it had nothing to do with his six impending finals.

No, Matt had an epiphany of a way he could surprise his girlfriend, Johanna Jones. Matt and Johanna had been dating seriously for some time, and "she knew I had a ring and . . . her family knew I was going to propose," Matt says. But what if there was a way Matt could propose to Johanna without her ever seeing it coming? What if he could take all of his finals later that day and surprise her at Hollywood week, showing up when she would least expect it?

But proposing to his girlfriend in front of millions of people on television "was actually never the plan at all," Matt says. "I had a whole plan to propose to her in San Fransisco because Johanna is a big Cinderella fan and so I had this Cinderella day planned in San Francisco."

But still, Matt couldn't shake the thought that now he had a chance to give Johanna the surprise of her life. "Johanna always said she wanted to be surprised. I think that was the biggest surprise I could do, especially [because] she was doing something she loved," Matt says. The timing seemed perfect.

Matt did a quick search online to see if there was any way he could get ahold of a producer at American Idol to see if he would even be allowed on the set. He sent off a few quick emails, and later that day, after getting some sleep and between powering through six finals, Matt received a call. The producers loved the idea and asked if Matt be there the next morning? Matt drove 11 hours through the night to arrive at Hollywood week on December 13.

The proposal was so hastily thrown together and so unplanned that Matt says only he, a few producers, and a few stage hands knew what was happening. In fact, throughout the filming, Matt kept getting strange looks and the questions "Who are you?" and "What is this guy doing here?"

"It was so nerve-wracking; it was so last minute," Matt says with a laugh.

Matt watched from backstage as Johanna received a standing ovation from Katy Perry for her performance of "Wicked Game."

Then, before he knew it, men were screaming "Go, go, go," and he was being ushered onstage for one of the biggest moments of his and Johanna's lives.

"The moment itself was actually kind of funny," Matt says, recalling the emotions he could see Johanna processing in a matter of moments—from the confusion to recognition to surprise to sheer joy—as well as the waterworks that surrounded the couple.

Johanna's excited tears, Katy Perry's dramatic sobs, and Johanna's mom's quiet crying were all caught on camera, and Matt jokes, "I don't know who was crying the most between the three of them."

"She knew as soon as she saw me that I would be proposing," Matt says, but he knew he had managed to surprise her and make the moment unforgettable because it could become a part of the show that was "changing her life."

"It was really, really surreal, and it worked out so well," Matt says, "One of the surreal things I didn't even think about was we're walking down the stage to get to [Johanna's] parents in the audience and all of a sudden I am walking into Lionel Richie's embrace and then Luke Bryan is fist-bumping me and Katy Perry is getting her tears all over my sweater. . . . That was never even part of the plan."

The delay between the filming of the show and the TV premiere of Hollywood week meant that Johanna and Matt could recently relive their engagement. The two had a viewing party with friends and family, and neither one of them had seen any part of the proposal until it was aired on national TV.

And now that their love story has been shared in news outlets all over the world, Matt admits, "It's been weird," but adds that "the love and support everyone has been showing and how happy everyone is for us has been really, really incredible."

Matt has received tweets from Katy Perry and Luke Bryan as well as messages from complete strangers who thanked him for showing them true love isn't dead. "I'm not saying that we are the ambassadors for love or anything," Matt says, "but we are in love and we are really happy that people are happy with us and we can share our story a little bit."

And what makes their story even sweeter is that Johanna and Matt know their love is deeper than those found in most fairytales or storybooks. There's is the beginning of a love that is eternal. The two will be married on June 22nd in the Las Vegas Nevada Temple.

"Our love isn't just the 'til death do you part love.' It's the kind of love we're going to have forever," Matt says. "We couldn't ask for anything more."