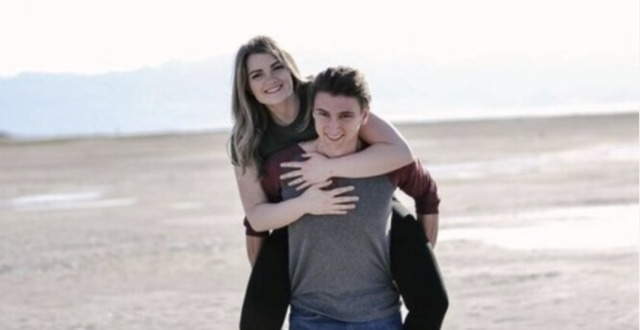 Over a month ago, Latter-day Saint Kaden Laga went missing in the Bitterroot Mountains of Idaho and Montana. Five days later, he safely returned home to his family, including his wife and soon-to-be son. Though Kaden is grateful for his return, he shared that being found alive wasn’t the biggest miracle from this experience.

Kaden went missing on Monday, August 14, after traveling on a wilderness trail with his family on horseback. One of the horses went lame, and Kaden decided to walk ahead.

“Because it was a rough trail, I took a detour and I ended up going several miles down the wrong trail," Kaden says. "I realized I must be going in the wrong direction because it had been several hours and they hadn’t caught up with me yet.”

At that point, it started to rain and Kaden admits that he had a bit of a mental breakdown. Kaden describes the mountain range he was on as "an ocean of mountain" that covers nearly 1.3 million acres, and he didn’t feel confident that being rescued was even a possibility. After realizing the danger of his situation, Kaden came to terms with the fact that he could likely die on the mountain.

“When I realized I was lost, I panicked for a second and then almost immediately felt peaceful about dying,” he says.

This realization caused Kaden to have an accounting with God, during which he asked his Heavenly Father: "I might come to the other side. How am I doing?"

He shared that if there ever was a time for him to doubt, it was then, but the experience instead added to his testimony and conviction of the gospel truths he already knew.

“I’ve had plenty of doubts and faith struggles in my past. And I feel like I’ve put in a lot of work to overcome them and feel confident, and so to be facing certain death . . . I remember having the thought, ‘How do I feel about that? Do I still believe that there is something out there?’ Then I think about it and go, ‘Yeah I do.'’’ He continues, “I’ve felt angels before, but more importantly than that, I’ve felt the Spirit testify of truth. I’ve had God send me promptings that have led to great results. The faith was there, but it is reaffirming to know that I really believed what I believed.”

With little food and little water, Kaden found himself on top of a ridge with no idea exactly where he was. The first night was wet, rainy, and cold. He managed to dig a hole in the ground and build a nest to keep the wind out. He recalled, “It took me at least an hour to get in a position where I wasn’t shivering uncontrollably.”

That night, while Kaden was in and out of sleep, he saw his ancestors and even people he didn’t know who spoke to him and said, “We love you, and we’d love to have you come home. But we are also here for you if you decide to go home to your wife.” Kaden said it felt like he could just step to the other side of the veil. He told them he wanted to stay on earth for his family.

Arden Laga, Kaden’s wife, was in Colorado with her family at the time she discovered Kaden was missing. Initially, she assumed the worst-case scenario: that Kaden was dead and she would have to raise their son on her own. Tuesday night she prayed and received a clear answer she couldn’t deny: "Kaden is alive and you will find him." Many tender mercies like this gave her continued reassurance while her husband was missing.

For five days alone on the mountain, Kaden continued to survive. One miracle Kaden experienced was the amount of energy he had. Although he had little food and water and slept little in the nights, he was constantly moving and hiking 16 to 20 hours each day. 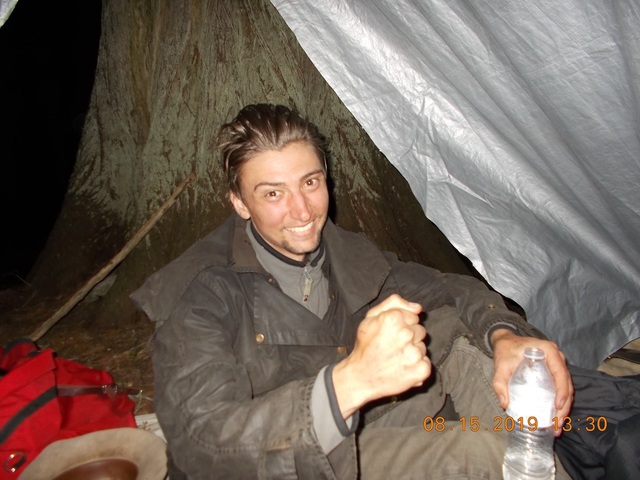 Image from the Laga Family.

“I was never hungry and I, hundreds of times, felt like I would not be able to stand back up and I always did. And I could always keep moving,” he says.

Kaden thought that after 48 hours people would have stopped looking for him, but that was far from the truth. Family, friends, and people Kaden didn’t even know were praying and fasting for him and his family. In fact, multiple search parties and a record-breaking amount of helicopters were sent to look for him. Kaden felt the prayers and support. He felt angels were literally around him lifting his feet and pushing him forward.

By Thursday afternoon, Kaden found a trail with human footprints and was overjoyed. He skipped down the trail in his worn-out shoes despite the pain in his ankles and tendons. But the trail stretched for miles and another storm hit, delaying his search for the source of the footprints. It wouldn’t be until later that evening and into the morning that Kaden would stumble into a rescue camp.

The morning he was found, Arden had voiced a frank yet heartfelt prayer to God. She had felt strongly that this experience had the ability to touch people’s lives and turn their hearts back to God. She wasn’t angry at God and knew God didn't make Kaden get lost, but she just wanted her husband back. She told God, “I know your children are important to you, but I need my husband home. If you could show me a sign, something.”

Five minutes later, she heard screaming from family downstairs who notified her that Kaden was found, alive. Immediately, Arden fell on her knees and cried.

Kaden was found at one in the morning on the Bear Creek Trail on the border of Montana and Idaho. A family friend helping search for Kaden had thought to leave a headlamp on at their campsite and Kaden saw it from a distance. 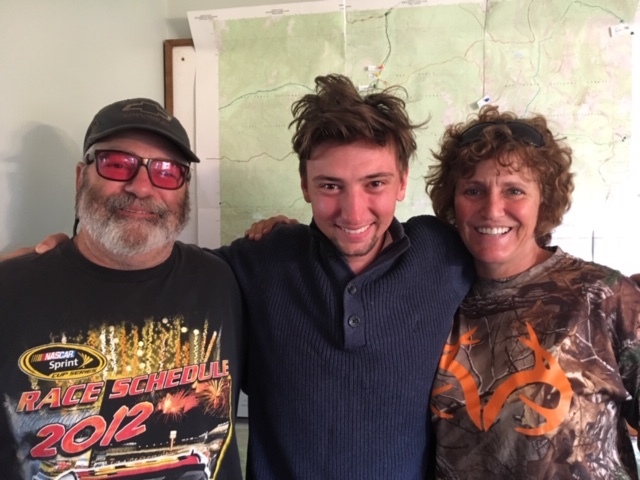 “They just came rushing out with no shoes on, and we were just hugging and they were screaming and it was just crazy. It was just bewildering to me,” Kaden says. “And I just couldn’t believe it. I couldn’t believe it was over. I had just had the conversation the day before that the goal was to get off the mountain in a month and a half at the latest. I consigned myself to the fact that no one was looking for me."

The Miracle for Us All

Despite these tender mercies, returning home was an even bigger eye-opening experience for Kaden. He learned that he was the first and only successful rescue from that mountain range this year. He also learned others had been missing in various places in Utah the same week he was in the wilderness. But their fate was much different than Kaden’s. For all those who have been lost, Kaden says the blessing for them is the same as it is for him:

“There are blessings and many miracles about me being saved, but there is only one miracle and that is through Jesus Christ’s Atonement and sacrifice death is no more and that through Christ not only will we live again but we will live better and we will get to live with our Father in Heaven.”

His first Sunday back, Kaden wrote down some miracles from the scriptures, and one of those was the story of Lazarus in the New Testament. In John 11, Lazarus was raised from the dead by Christ. Many readers might say the miracle is that Lazarus’s sisters get to have their brother back. When Martha said she had faith that Christ would give her whatever she asked, Jesus said to her in verse 23 through 26:

It was the principle Christ was trying to show, a beacon of hope for all who would read this story. “We are all going to die one day and we are going to be reunited with our loved ones,” Arden says. 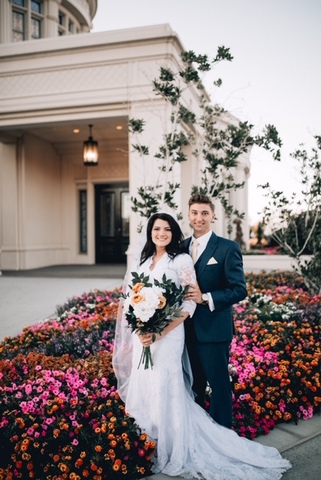 Kaden and Arden Laga on their wedding day in 2016.

Kaden hopes his story doesn’t teach people that if you pray for something you get exactly what you want: “God is real and God cares and sometimes He extends people’s lives but He always brings people back eternally, and that’s the thing that gave me true peace.”

For many, their tragedy or story of being lost won't have a happy ending. Arden says in the Church we can often carry the misconception that if a tragedy happens in our lives, it’s because we aren’t doing enough. “I just don’t think that’s true. God is no respecter of persons,” she says, adding, “When tragedy happens, it’s a part of mortal life.”

When Kaden was missing, what helped Arden through everything was family and prayer. At times when her faith and hope were down, her family’s faith and hope were up and vice versa. Her advice to families who have gone through or are currently going through situations like hers is that real peace will come from God.

“Always connect with God. It’s going to give you the peace and comfort you need,” she says.

Kaden has had small perspective shifts after being lost in the wilderness. He used his experience as a way to be thankful for every moment and value his relationships just a little bit more.

“Life is just this short, little mission that we have and eventually we go home, and while we are here, I might as well make it as enjoyable for people as I can and make sure everyone knows that I love them,” he says. 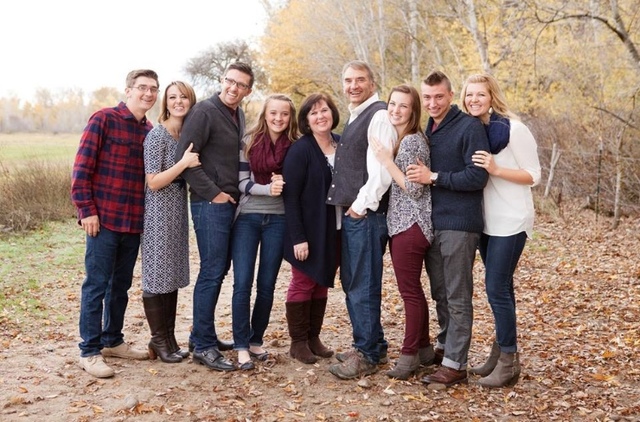 Image from the Laga family.

The Lagas believe this trial, though traumatic, was used as an opportunity for God’s children to turn their hearts back to Him. Arden said she received countless tender mercies of her own.

“It all points to the Savior," Arden says. "I have a very strong testimony of that. In our whole life, He is the center."

Mormon Life Miracles TrialsMiracles,Trials,Mormon Life
Comments and feedback can be sent to feedback@ldsliving.com