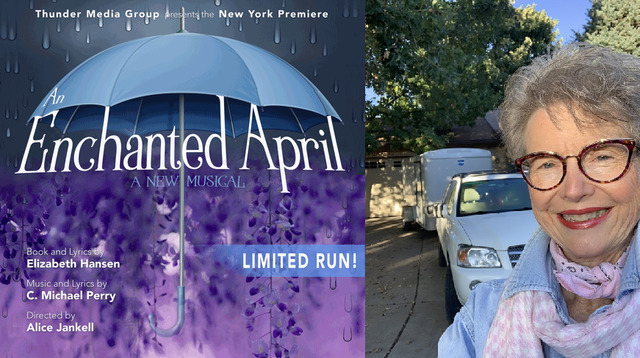 Today when you hear the word “theater,” you probably think of a dark room, enormous screens, and overflowing buckets of popcorn. But for some people, the theater still represents sweeping curtains, hours of rehearsal, and mic checks. That’s what it means for a small group of Latter-day Saints who are about to make their debut on Off-Broadway in New York this November with a new musical called An Enchanted April. “I don't think there has been a collection of members of the Church producing a musical like this for about 15 years,” writer and Latter-day Saint Elizabeth Hansen says. “The composer, our executive producer, our assistant musical director, our projection designer, our publicist, and two of our actors are also members. It's unique and quite remarkable.”

A Dream Coming to Life

“An Enchanted April is a lovely story that starts in London during a particularly dreary February in 1922,” Hansen explains. “Four world-weary women, desperate to escape their memories of WWI and the repression of London, dare to rent a villa in Italy for a month. Miraculously, in just one short, enchanted April, the lives and hearts of these women are transformed by wisteria, sunshine, a small medieval castle, and each other.”

Hansen, who has also been working as the lead writer on the Church’s new Book of Mormon video scripts over the last several years, explains, “I first saw the movie in the early 90s and loved it. Then years later I read the book, and as I did, music just seemed to leap off the page. The story is so lyrical, that it easily lends itself to music, and I just said to myself, ‘This has to be a musical!’”

But it wasn’t until a few years later, when she met composer C. Michael Perry through a musical for the 2002 Olympics in Salt Lake City, that she began to seriously pursue the project. The duo hit it off and discovered they worked well together. As Hansen says, “the rest is history.”

After years of work, the show was written. Then came an intimidating new thought of trying to get the show to Broadway. “Over the last year, as we began to craft and shape this current version of the show—a very much improved version in all sorts of subtle ways—you always wonder if it is good enough for a New York City audience,” Perry shares. He continues, “God blesses us—and Liz and I have remarked on that often to each other—in all aspects of our lives. He wants us to succeed. He helps us to succeed. But we must always work—that is what Adam was told as he left the garden. God, however, clears the way and makes it all possible, even to the point of imbuing us with our talents in the first place. We are nothing without Him.” With this same perspective, Hansen reached out to some of her Latter-day Saint connections for help getting the musical to New York.

Through common connections, Hansen ultimately ended up in contact with Andrew Joy, who is now the executive producer of the show. Despite some difficulty, they ultimately were able to book an Off-Broadway stage. Then came the challenge of finding talented people who share the vision and love of the show enough to work for the pay the team can offer. “I am happy to say that we have found all of those people,” Hansen says. Perhaps one of the biggest challenges, however, was working from so many different locations. Though they had to collaborate with Hansen in Utah, Perry in Maine, and Joy in New York, they are excited to come together in one location for the opening performances next month. 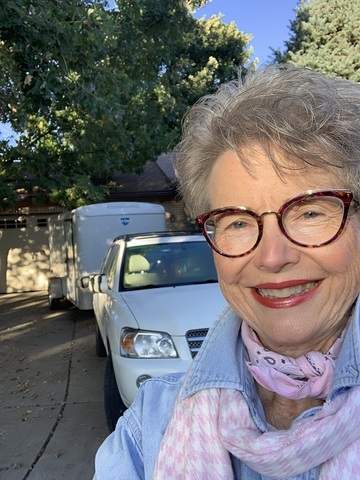 Elizabeth Hansen driving props and set pieces across the country

Not everyone involved in the musical is a member of the Church, but because of the way that networking and recruiting worked for Hansen and Perry, many are, including actress Melody Putnam, who plays the perturbed Italian housekeeper and cook, Francesca.

This is Putnam’s first role in New York, and it has taken a lot of work to prepare for it. Putnam explains, “I took the script over to my friend, Marcia Day, who served a mission to Italy, and she helped me with the pronunciation and expression. Now I wander around the house, the grocery store, the mall practicing my lines out loud. As I drive in my car, I go through my scenes. You’ve probably seen me; I’m the woman at the stoplight who is having a lively conversation with herself in Italian.

But her role in the play is only a small part of why Putnam loves the uplifting performance. “I love Enchanted April. I’ve read the book, and I discovered the movie years ago. I went to Italy with some girlfriends for our own “Enchanted April,” and I fell in love with Italy. It was wonderful. Now I get to relive it on stage! I love the characters, the story, and the message,” Putnam says. 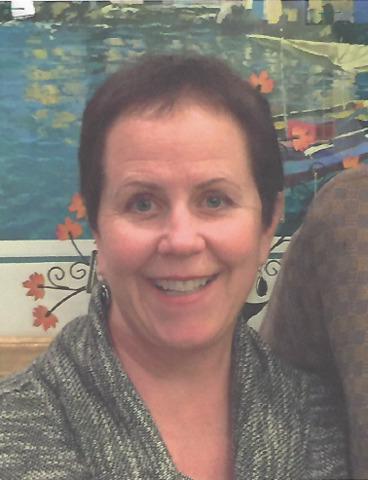 Perry agrees: “The show really has nothing to do directly with the Church or the gospel—the characters are not Latter-day Saints, but the story is so full of the principles of gospel doctrine that it is really quite a faith-promoting experience, even in rehearsals I have been lifted to moments of spiritual rapture. That was one of the things that drew me to the story. I love to tell stories of hope and positive change. Especially when the world tells us, sometimes, that those things have little value.”

“I think any time a group of like-minded people get together and create something, it is exciting, interesting and, with any luck, an inspiring experience for an audience who are also like-minded,” Joy says about the number of Latter-day Saints involved in An Enchanted April. He feels it is important for Latter-day Saints to have a voice in show business. “If no Latter-day Saints are in show business, then who tells our stories; the stories that matter to us? I know of some people who have shied away from a career in show business because they are worried about losing their faith. It can happen, but it can happen in any business. I think it is important for people to use theatre and art to build faith and community.”

Perry adds, “We have a special ability, as we stay close to the Spirit, to effect positive change through the opportunities we give our audiences to come in contact with those principles, whether we are writing, directing or performing, or doing technical work. There is something about the Spirit being invited in to aid in 'creation' that speaks to many, both in and out of the Church. I don't think we should wear our testimonies on our sleeves, but I do think that our 'world-view' or maybe our 'God-view' is so much more basic than all the things that man and the adversary have tried to cover it all up with. 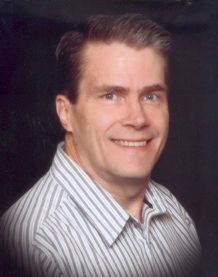 Hansen and Joy both agree. Though she hasn’t had any specific missionary experiences, Hansen says, “What has shocked me, really, is how candid I have been with my non-member colleagues about my inspiration and process. I'm always saying, "God told me this. God told me that." And they're all like, “Wow. Talk with Him some more.”

“Working on Broadway I have an opportunity to meet a lot of people from many places,” Joy says. “I’m very open about my religion, my family, BYU, etc. For me, it is so important to just be a good person. When I’m trying to do that, that is when people feel open to asking questions about what I believe and why. I’ve had discussions about church and my faith with some of the most powerful people in the entertainment industry. None of them have joined the Church, but I like to think that they walk away with a better understanding of who we are as members of the Church and that we follow its teachings because of a sincere desire to be better and love more.”

Theater can powerfully affect both those who are producing it and those who are viewing it. And for the team behind An Enchanted April, their love of theater and their faith intertwine to create that moving effect. “Without my faith, I don’t think I could work,” Hansen says. Joy agrees, “My faith helps me to see that all people should be treated with love and respect. I choose to be involved with work that promotes love, respect and understanding. I think theatre (and art in general) can inspire people to be better and build faith, even if it isn’t specifically about faith or beliefs.”

Perry, who is a convert to the Church, has found additional spiritual significance in stories and theater. “I have always been drawn to stories that are positive in outlook. . . There is so much theatre out there that affirms testimony and is it not all written by members of The Church of Jesus Christ of Latter-day Saints. A recent Broadway musical I attended left me feeling so good about life and people in the world. That is why I attend theater. It is why all should attend theater: to give ourselves an opportunity for experiencing positive change in others—the characters on stage—thereby realizing that it is possible in our own lives. . . . Do your research before attending any play or musical, for when you do, your experiences will be more positive. Theatre is a powerful and direct connection to storytelling, and great stories, true stories—true as in the direction headed—work like scripture, they point the way.”

For Latter-day Saints looking for an uplifting theater experience, Hansen says An Enchanted April is a good place to start. “It's a show you can see and know that you're not going to see or hear anything offensive or questionable or immoral. You will be emotionally moved, uplifted, and entertained. It's a warm and lovely show filled with rich, complex characters who are trying to figure life out, just like we all are.” 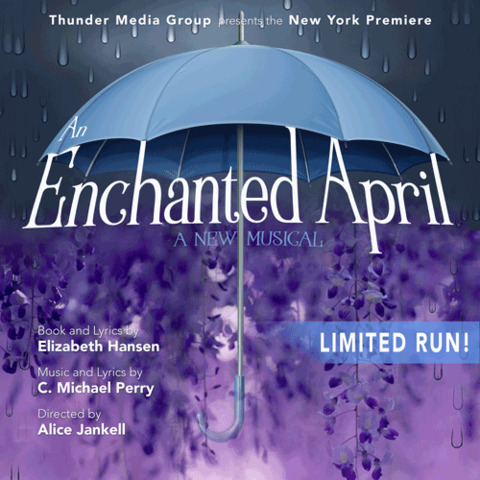 An Enchanted April premiers Friday, November 1 at 8:00 p.m. and will play Wednesday through Saturday at 8:00 p.m., with matinees on Wednesdays and Saturdays at 2:00 p.m. until November 16. Catch the show at Theatre Two @ Theatre Row in New York City. Find more information, including tickets and behind-the-scenes fun, at enchantedaprilamusical.com.