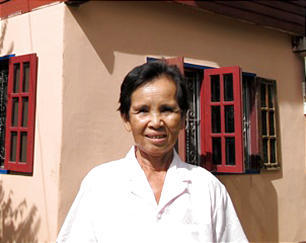 Latter-day Saints enjoy blessings of the Church in Laos

In Laos, once called the "Land of a Million Elephants," Church membership in the capital city Vientiane reaches approximately 200. More than 100 actively attend a branch under the direction of the Thailand Bangkok Mission. Laos was dedicated in 2006 by Elder Jeffery R. Holland of the Quorum of the Twelve.

Bounmy Buttavong, the first Laos member, joined the Church in 1991 in Minnesota, while living in the United States. Since she returned to Laos in 2002, she has served as the branch Relief Society president. Many of her family have since joined the Church in Laos and the U.S.

Tiengsak Intravong, 25, a grandson of Bounmy Buttavong, was baptized in 2004. As the first Laos member to serve a mission, he was called to Thailand. He and his new wife, the former Koungnang Khompadith, serve as translators for the Church. The Book of Mormon in Laotian at present is printed in a shortened version. Brother Intravong assisted in the complete translation of the entire Book of Mormon with four other members. Now the translation is awaiting the final approval for printing.