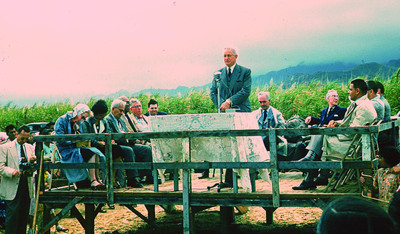 Standing in a Sugarcane field in Laie, Hawaii, on Feb. 12, 1955, President David O. McKay founded the Church College of Hawaii.

On that day he spoke of a vision he saw 34 years earlier when he witnessed a group of international school children participating in a flag ceremony at the Church school in Laie. President McKay recounted that he had seen in those children the ability of the gospel of Jesus Christ to unite all people.

Then he spoke of the influence of the new school — which would later become Brigham Young University-Hawaii. "From this school, I'll tell you, will go men and women whose influence will be felt for good toward the establishment of peace internationally," he said.

Later, during the dedicatory prayer, he gave further insight into the great potential of the place where he stood: "We dedicate our actions in this service unto Thee and unto Thy glory and to the salvation of the children of men, that this college and the temple and the town of Laie may become a missionary factor, influencing not thousands, not tens of thousands, but millions of people who will come seeking to know what this town and its significance are."