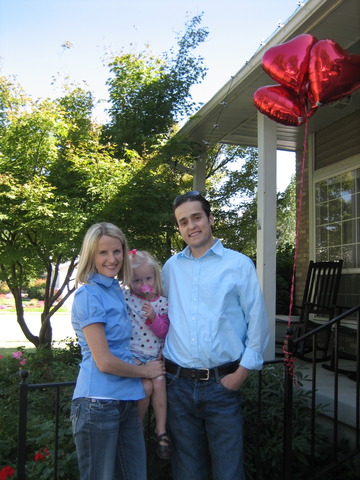 “When I was born, the doctors said I had half a heart,” says Paul Cardall. “And essentially, that was right.”

Paul, who was born with congenital heart defect (CHD), says doctors didn’t know if he had long to live. His tiny heart was missing the tricuspid valve (tricuspid atresia), a vital passageway that carries blood from the right atrium to the right ventricle. Without it, the heart cannot properly oxygenate blood for the rest of the body.

Cardall pulled through: when he was 22 hours old, doctors performed an open-heart surgery that allowed him to live. But everyone knew that his life—however long it would be—would be difficult.

“I knew my heart had problems, and that was always in the back of my mind,” says Cardall. “But my parents used it as a teaching tool. I'd always get priesthood blessings before treatments, and we came to see it as a blessing God gave us.”

Cardall’s childhood was punctuated by constant cardiologist visits and surgeries. By the time he was 15, he’d had a walnut-sized blister removed from his heart, had undergone a Fontan procedure (reconstructive heart surgery that redirects blood directly from the right atrium to the pulmonary arteries), and had a pacemaker installed.

A Song of the Heart

Yet in the midst of all this, Cardall made a discovery: music. The death of a friend left him sad and troubled, but sitting at the family piano brought him solace. The gorgeous melodies he drew from the keys—although he’d only had a few months of piano instruction before quitting several years earlier—amazed his family. It was obvious that he had a gift.

By his late teens, he was playing at Nordstrom’s and at The Roof Restaurant at Temple Square. Everywhere he played, listeners requested CDs of his songs, so he recorded an album. Shortly thereafter, bestselling author Richard Paul Evans heard it and asked him to compose a musical adaptation of The Christmas Box. His career took off from there, and he now has his own recording label, Stone Angel Music. Yet Cardall’s CHD was always lurking somewhere in the background, and his fight was far from over.

In 2009, when Cardall’s health was at its lowest, he released Sacred Piano. Of his 13 albums, he says that one is his favorite. “I put together some of the most meaningful things I had done up to that point, hoping it would be something I could leave behind. It could have been my ‘last lecture’ for everyone I left here.”

Sacred Piano features the song “Gracie’s Theme,” which he wrote in honor of Gracie Gledhill, a little girl who suffered from CHD and died shortly after receiving her own heart transplant. “I was able to play ‘Gracie's Theme’ at her funeral,” says Cardall. “It was a way for me to honor her and all the kids she represents. I think she represents all those children who are called home early.”

Because of the unique nature of his heart defect, Cardall often received treatment in a pediatric unit where he was able to meet many “cardiac kids” like Gracie. “Being in that pediatric unit with so many little babies that had CHD was a beautiful thing. Not all of them make it, whether they get hearts or not, and that’s hard. But being there was truly sacred.”

Cardall isn’t the only one who loves Sacred Piano: earlier this year, Cardall’s “Sweet Escape,” a song from the album, ranked number one on ReverbNation’s global Christian/Gospel music chart.

Throughout his musical successes, Cardall continued fighting CHD. Just over two years ago, doctors determined that his health had deteriorated to the point that a transplant was his only hope for long-term survival. His name went on the heart donor list. From there, all the Cardalls could do was wait. His wife, Lynette, and his 4-year-old daughter, Eden, cared for him and prayed for his heart each day—both for his slowly dying heart and for the heart that he would one day receive from a donor.

“My family gathered at one point to give me a blessing, and my dad talked about how 2009 would be a hard year, and how everyone would need to be there for me and Lynette,” says Cardall. “Who would have known that a year later two men in that room—my brother Brian and my grandfather—would have died, and I would still be here?”

In June 2009, the Cardall family unexpectedly lost Paul’s brother, Brian. In response to a bout of abnormal behavior attributed to Brian’s bipolar disorder, Brian had been Tasered by a police officer. Brian died as a result.

“The irony of it,” says Cardall, “was that I had [received] notice that I might not be around much longer, but that Brian died so suddenly, and in a way that could have been prevented had there been more training in the use of a weapon. It made me think about why I’m still here, and what a responsibility that is. I wanted to live for Eden—to see her grow up and be there for her.”

Then, after 385 days on the waiting list, a miracle happened: the Cardalls received word that a suitable donor heart had become available. On September 9, 2009, doctors performed a successful heart transplant. Cardall had beaten the odds again.

These days, Cardall sees his cardiologist every three weeks and undergoes a heart biopsy every six weeks to ensure that his body doesn’t reject the donated heart. He’ll be on anti-rejection medication for the rest of his life. But his transplanted heart has done exceptionally well. In fact, he was even able to hike Mt. Olympus earlier this summer to commemorate the one-year anniversary of his brother Brian’s death.

Over the course of his illness and recovery, Cardall posted to his blog, mytricuspidatresia.blogspot.com. Many of these blog posts, as well as additional thoughts and reflections on his past, have been compiled into a book entitled Before My Heart Stops. It will be available at Deseret Book on September 9, 2010. The book’s release will mark the one-year anniversary of Cardall’s heart transplant.

“Some people don't need this kind of experience, I think, but I almost wish more people could have an experience like mine. It changes how you think and how you live when you know that your time on earth may be limited.”

People I'm A Mormon Music Health Books InspirationI'm A Mormon,Music,Health,Books,Inspiration,People
Comments and feedback can be sent to feedback@ldsliving.com