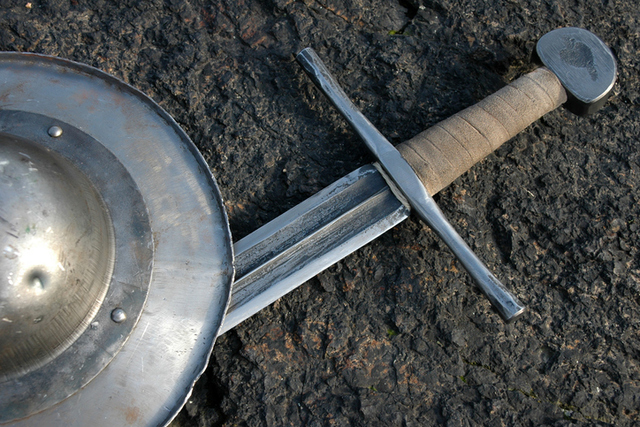 Lessons from the stripling warriors and Pahoran: ‘Come, Follow Me’ Alma 53–63

Ever since I was a teenager and heard John Bytheway’s talk “Righteous Warriors,” I’ve been hooked on finding lessons from the war chapters of the Book of Mormon. No matter how many times I read the stories of Captain Moroni, Helaman, and Teancum, I find new analogies and teachings for my own life. I hope you can as well as you look through some of these additional resources focusing on the stories of the stripling warriors and Moroni’s epistle to Pahoran highlighted in this week’s Come, Follow Me.

There are many personal and individual lessons that we can each learn from these chapters, but by studying the stories of Helaman’s 2,000 young soldiers and the tactics of Captain Moroni, there are some cool takeaways for parents too. As President Joy D. Jones stated in April 2017 general conference:

Fortifying children to become sin-resistant is a task and a blessing for parents, grandparents, family members, teachers, and leaders. We each bear responsibility to help. However, the Lord has specifically instructed parents to teach their children “to understand the doctrine of repentance, faith in Christ the Son of the living God, and of baptism and the gift of the Holy Ghost” and “to pray, and to walk uprightly before the Lord.

We don’t know much about the parents of the stripling warriors, but there are some powerful lessons for our own families in what we do know. Here is what author Debbie Bowen has to share.

Day by day, through small and simple means, we can fortify faith and our family fortress. The home is a crucial training ground for helping children learn lifelong behaviors that will provide increased protection during personal times of trial and temptation.

The Book of Mormon describes such homes and the parents who raised valiant young soldiers despite difficult circumstances. Although they lived in a different time and place, their story contains significant parallels and critical combat strategies for latter-day warriors.

► You may also like: 3 things we can learn from Captain Moroni about fearless parenting in a technology age

We all are aware of the fiery darts of the enemy of righteousness being sent like a terrible wind against the young priesthood holders we love so much. To us, they seem like the stripling warriors, who called themselves the sons of Helaman. They can survive, as those young warriors did, if they keep themselves safe, as King Benjamin urged them to do.

The sons of Helaman did not doubt. They fought bravely and came off conquerors because they believed the words of their mothers. We understand the power of the faith of a loving mother. Mothers provide that great support to their sons today. We holders of the priesthood can and must add to that support with our determination to answer the charge that as we are converted, we are to reach down to strengthen our brethren.

Read more of President Eyring’s talk in “That He May Become Strong Also” from the October 2016 general conference or watch it below.

A Call to Spiritual Arms

The Lord told the Prophet Joseph Smith that now, meaning our day, is the eleventh hour and the last time that He will call laborers into His vineyard for the express purpose of gathering the elect from the four quarters of the earth.

My question tonight to every one of you between the ages of 12 and 18 is this: Would you like to be a big part of the greatest challenge, the greatest cause, and the greatest work on earth today?

Would you like to help gather Israel during these precious latter days? Would you, who are the elect, be willing to help find the elect who have not heard the message of the restored gospel? Would you like to be among those “swift messengers” of whom the prophet Isaiah spoke?

Now, participating in the gathering of Israel will require some sacrifice on your part. It may even require some changes in your life. It will definitely take some of your time and energy and your God-given talents. Are you interested?

► You may also like: What prophets have said about war

Part 2: Interpretations and Lessons from Moroni and Pahoran

The story of Moroni’s scathing letter censoring Pahoran and Pahoran’s remarkable response has been told many times over to teach different principles. Here are just four possible lessons we can learn from Alma 59–61.

In this week’s episode of Sunday on Monday, host Tammy Uzelac Hall quotes the following verse:

Do ye suppose that God will look upon you as guiltless while ye sit still and behold these things? Behold I say unto you, Nay. Now I would that ye should remember that God has said that the inward vessel shall be cleansed first, and then shall the outer vessel be cleansed also (Alma 60:23).

She uses the analogy of cleaning the outside of a cup while there are things floating in the water inside it to “cleansing the inner vessel.” She then asks the following:

What are some steps we take to cleanse our inner vessel? You have the read your scriptures, and say your prayers, and go to church, and the reason I say those is because they work. And sometimes people think, "Well, those are the trite trivia, you know, seminary answers," and I'm like, "Well because they absolutely work."

Podcast guest Aliah Hall-Eggington goes on to explain more about the topic.

[We] feel ashamed of the floaties [in our cups], and so we're polishing the outward vessel, you know, we're always looking at the outward vessel. "How do I look? How do I seem? How are people perceiving me? Because I know that there's something not quite right inside and I don't want people to look at it, I don't want people to point it out," instead of being like, and not to everybody but to those that are close to you and love, "I'm really struggling with these floaties," and then being aware of it and reaching out and speaking up about the things that you're struggling with, are really the first step to getting rid of them.

The  Sunday on Monday Study Group is a Deseret Bookshelf PLUS+ original presented by LDS Living. You can access the full study group discussion through the Bookshelf app. Listen to a segment of this week's episode above or listen to the full  Sunday on Monday episode here.

In a BYU devotional last year, Elder Renlund shared a lesson about spiritual receptivity that he learned as an exhausted young medical student reading the exchange between Captain Moroni and Pahoran.

The inability to sense God’s love can stem from sin or from not pressing forward on the covenant path. The inability can also be due to physical or mental illness. For instance, clinical anxiety and depression require professional help. God expects us to seek professional help when indicated. Remember Captain Moroni’s rhetorically sarcastic question to Pahoran: “Do ye suppose that the Lord will still deliver us, while we . . . do not make use of the means which the Lord has provided for us?” (Alma 60:21). Prayers in this situation may seem somewhat insincere to God as they are manifestations of faith without works.

Read the full devotional as it appeared in BYU Magazine this summer.

Kelly Newman explains that emotional intelligence, or the ability to be aware of your own emotions and the emotions of others and to be able to use that to react intelligently, is a skill that we can learn from studying Pahoran’s reaction to Moroni’s epistle.

I’m confident Pahoran knew one of the great secrets of life. How many of us can be successful each and every day without the help of other people? Anyone? One of the great secrets of life is that we all rely upon each other to some degree to be successful. Pahoran knew he needed Moroni, and taking offense or reacting badly to Moroni’s scathing letter could have been disastrous. The first line of the chapter heading in Alma 62 sums up the direct result of Pahoran’s intelligent response: “Moroni marches to the aid of Pahoran in the land of Gideon.” What a beautiful outcome for what initially could have been a great conflict.