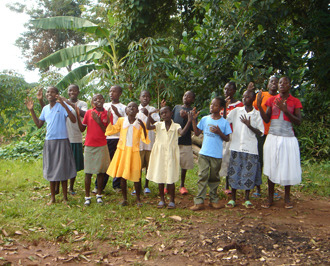 Letters from Uganda: AIDS — 'What did we do to deserve this?'

The streets of Mukono, Uganda, were already alive with thousands of brightly dressed people when Steven Ssenyonjo, director of the Child2Youth Foundation, arrived in his famous "Green Van" to pick up my husband, Larry, and I at 7 a.m.

On our way to visit a nearby school and children sponsored by the foundation, we turned into a gas station, which was protected by armed guards, to refuel the van. When the gas tank was full, we started to pull away from the station and, WHAM, we were broadsided by a tour bus.

Larry had seen the bus coming and let out a gasp, which warned me to brace myself, but I was still shaken. Steven jumped out of the van to assess the damage: Let's see. We were going very slowly. The driver of the tour bus says he's so, so sorry. It's only a dent, and the van still runs. OK. We're good. Off we go.

We had no idea this was just the beginning of the alarming experiences we would have that day as we went to visit a group of children suffering the effects of AIDS.