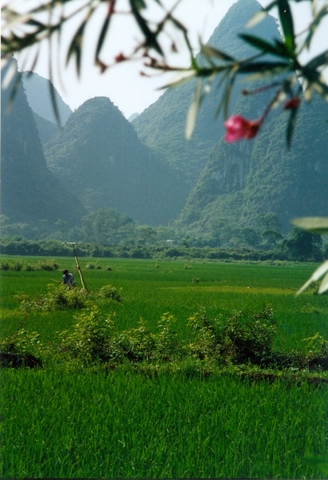 Letters in the Jade Dragon Box: Finding the Church in China’s Past

There are countries cloaked in mystery. One such country is China: an enigma of thousands of years of emperors, Confucian philosophers, peasant farmers and scientific discoveries of wonder. The winds that blow across China whisper of the Silk Road and the Great Wall, of the terra cotta soldiers of Xian and the Palace of Tranquility in the Forbidden City, Peking.

Author Mark Twain once wrote that “Travel is an antidote to prejudice and narrow mindedness.” I have found this to be true. As we walk the pathways of another’s heritage and culture, we become more understanding, more aware of similarities and less bothered by differences. And, with an LDS sensibility, we realize that all the citizens of the planet are valued sons and daughters of a loving Father.

In doing research for my historical novel, Letters in the Jade Dragon Box, I had the privilege of discovering a country with thousands of years of astonishing history, a culture saturated in legend and lore, a citizenry of curiosity and tenacity and political systems ranging from Emperors to warlords to the communism of Mao Tse-tung. The research also took me into fascinating discoveries concerning the connection between The Church of Jesus Christ of Latter-day Saints and the people of China: Apostle David O’McKay’s 1921 prayer of dedication given in the palace garden of the Forbidden City; the attempt to establish missionary work in Hong Kong in 1950, just after the communists took over China and just prior to the outbreak of the Korean War in 1951; of twenty-six-year-old Elder H. Grant Heaton accepting the call to serve as the mission president for the Southern Far East Mission in 1955. (Elder Heaton was one of the first missionaries called to labor in Hong Kong in 1950.) I was touched by the humble trust shown by Elder Heaton and his wife Luana as they took their three-month-old son, Grant Junior, and traveled halfway around the world to serve the Lord.

With permission, I will share some of Brother and Sister Heaton’s reminiscences of their time serving the wonderful people of Asia. To begin, Brother Heaton remembers the strange circumstances surrounding their call. As a missionary returned from Hong Kong, he had been called several times to meet with Elder Harold B. Lee and Stephen L. Richards, counselor to President McKay, to discuss and evaluate the conditions in the Far East.

“Still a few weeks later, I received a call from President Richards’s office, requesting another meeting. It was almost the same as the first, except he did wonder, out loud, if it would be possible for me to go to Hong Kong this summer. I assumed that he wanted me to accompany one of the General Authorities, or even a new mission president called to re-open the area. I knew that President Robertson had been urging for some assistance to continue operations in Hong Kong, which was then part of the Japanese mission. I told President Richards that I would be delighted to go to Hong Kong for the summer. He asked if my wife would be willing to go. Because Grant Jr. had just been born, I suggested that I talk to her about it first. He asked me to return in one week for another discussion.

“As we entered President Richard’s office, President J. Reuben Clark was there, and in a few moments President McKay walked in. He was very jovial and made a great fuss over little Grant Jr., playing and laughing with him for some time.

“Finally, seated in his large swivel chair, he turned and looked at me and said, 'Now, President Heaton, this is a very important assignment. I have long been interested in the Chinese people and the missionary work there.' For the first time it dawned on me that all this was leading up to me being called as a mission president. My first reaction of shock and disbelief impelled me to say, 'President McKay, I am neither capable, nor worthy to be a mission president.' He very causally replied, 'Oh, we are perfectly aware of that, Brother Heaton.' Our official call came in the mail a few days later.

“Our next surprise was to become aware of the immense territory covered by this new mission. President McKay said it was not only the largest mission in the church, but it contained more people than the missions in the rest of the world combined.

“In subsequent meetings with the First Presidency, we learned how deep President McKay’s interest in China really was. At the time we were set apart, it was mentioned that several attempts had been made in China, in failure. 'This time we will not fail!' he promised.”

“The next three months seemed like three days. It is not easy to leave family, friends and loved ones behind.

“President Joseph Fielding Smith, then the president of the Quorum of Twelve Apostles, and Sister Jessie Evans Smith were assigned to accompany us and see that we got started all right. Most of the general authorities were there to see President and Sister Smith depart and wish them God-speed on their assignment. At the farewell at the train station, the conductor had a difficult time getting Sister Smith or me to board the train. The train started to move. There was such a large crowd that I could hardly reach the steps of the train. I almost dropped the baby as I boarded the train. Sister Smith was still not on the train. Elder Bruce McConkie, (her son-in-law) ran and picked her up and put her on the car behind ours. President Heaton and President Smith were already on the train. When Sister Smith had to be carried to the train, President Smith muttered, 'That woman will be late to her own funeral.'

“As the train slowly departed, all the people, families and general authorities began to sing “God Be With You Till We Meet Again.” It was an emotional time for me and also for Sister Smith. The meaning of the song was completely fulfilled during the next five years.”

The Southern Far East mission began in Hong Kong with eight eager missionaries being led by a very capable mission president and being fed by a loving “mission mom.” Over the next months and years the gospel net was tossed wide as Cantonese and Mandarin were learned, lessons given and baptisms performed. President and Sister Heaton would see the hand of the Lord in the missionary work, growth of the church and miracles for their family. President Heaton would be instrumental in securing floors of apartment buildings to serve as branch chapels and in purchasing a sizable piece of land in Kowloon for the mission home. In later years when Gordon B. Hinkley was searching in vain for property on which to build the Hong Kong temple, the following experience is recorded in his biography:

“Something very interesting came into my mind . . . I did not hear a voice with my natural ears, but into my mind there came the voice of the Spirit. It said, ‘Why are you worried about this? You have a wonderful piece of property where the mission home and the small chapel stand. They are in the very heart of Kowloon, in the location with the best transportation. Build a building of several stories. It can include a chapel and classrooms on the first two floors and a temple on the top two or three floors.' . . . I relaxed and went back to sleep” (Go Forward with Faith, pg. 481).

The Hong Kong temple was dedicated May 26 and 27, 1996. One year later, in 1997, as the 99-year lease agreement between Britain and China expired, Hong Kong went back to the jurisdiction of mainland China. The Church of Jesus Christ of Latter-day Saints would have a temple in communist China.

As I sat in the living room of Brother and Sister Heaton, hearing many of the missionary stories and absorbing gems of wisdom about the culture, I could feel the deep love and respect they have for the people of China. Through my research I was privileged to open a small window into that beautiful landscape with its amazing people. My soul is richer for the journey.