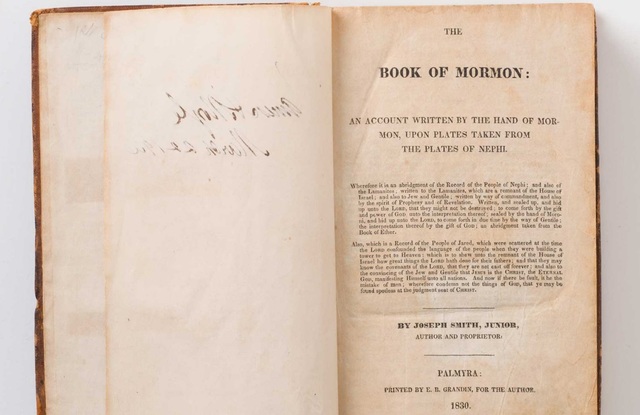 Library of Congress Exhibit to Feature First-Edition Book of Mormon

The Library of Congress has put together a new exhibit, "America Reads," that will open June 16 and features 65 books by American authors that have had a profound impact on American life.

And among the nation-shaping books in the collection will be a first-edition Book of Mormon.

Forty of the books in the collection were chosen directly by the public, including the Book of Mormon, while the other 25 were chosen by the public from a list created by the Library of Congress.

"The exhibition will feature some of the rarest and most interesting editions in the Library’s collections," a press release from the Library of Congress states. "Many volumes are from the Rare Book and Special Collections Division and are seldom on public view.

The Book of Mormon that will be on display is an 1830 edition published by E.B. Grandin in Palmyra, New York, that has been in the Rare Book and Special Collections Division of the Library.

Elder Jeffrey R. Holland wrote in his book Christ and the New Covenant that the Book of Mormon “should be considered the most remarkable and important religious text to be revealed since the writings of the New Testament were compiled nearly two millennia ago. Indeed, in its role of restoring plain and precious biblical truths that had been lost, while adding scores of new truths about Jesus Christ and preparing the way for the complete restoration of his gospel and the triumphant day of his millennial return, the Book of Mormon may be considered the most remarkable and important religious text ever given to the world."