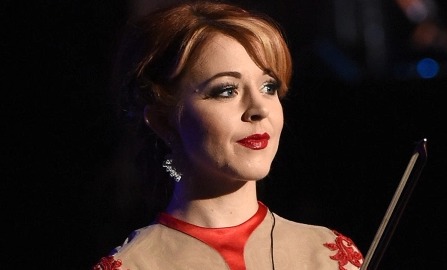 Lindsey Stirling announced that her father, who had been battling cancer over the past year, died on Tuesday morning.

In a message on Facebook, Instagram, and Twitter, Stirling posted: "There is nothing to say that could express my gratitude for this amazing, selfless man. But I love you daddy. I'm the woman I am today because of you."

Just before the release of Stirling's 2016 album, Brave Enough, she described her struggles after learning her father, Stephen J. Stirling, had cancer at the same time she was trying to grapple with the loss of her best friend Jason "Gavi" Gaviati, who passed away from Burkitt lymphoma in November of 2015.

That's when Stirling entered the darkest period of her life, something that strongly impacted her music. "At first I was writing the most depressing stuff," Stirling told the Associated Press. "[I]t didn't have a lot of depth to it. . . . I kind of realized I have to process these emotions myself before I can write about them."

She continues, "I want to learn how to open my heart up more." And that's what Stirling set out to do with her last album, stretching to see if she was brave enough to share her emotion through music.

In her book, The Only Pirate at the Party, Stirling explains what helped pull her through this period of her life: her faith.

“I did rely on that, reading scripture passages about the afterlife and that the gospel will be taught to those who pass on and we will see them again and there is a wonderful place for them,” Stirling says, according to the Deseret News. “But also to be able to know that there is modern-day revelation about that today and in more detail — it’s been everything to me in those moments, to realize that I would see Gavi again and that he is happy.”

She continues: “Sometimes when you least expect it, life changes and life hits you,” Stirling said. “This fall, I just had some things that I went through that really reminded me that none of this matters — no money, no amount of fame. What’s important is the people around me.”

During his struggle with cancer, Stirling's father shared his faith on his blog, writing in May 2016:

“Answers to my petitions in personal prayer and priesthood blessing have reaffirmed the realities of my situation as my ordeal progresses. I have been counseled to follow the instructions of my doctors, submit to their treatment, to endure to the end of this medical process, and to be patient under the length of that care. That does not sound to me like a miraculous and instantaneous flash of televangelical healing power – though Heavenly Father still manifests his power with such healing command. No, my miracle may be even more dramatic, in teaching me to be more humble, more patient in affliction, and more long-suffering in endurance.”