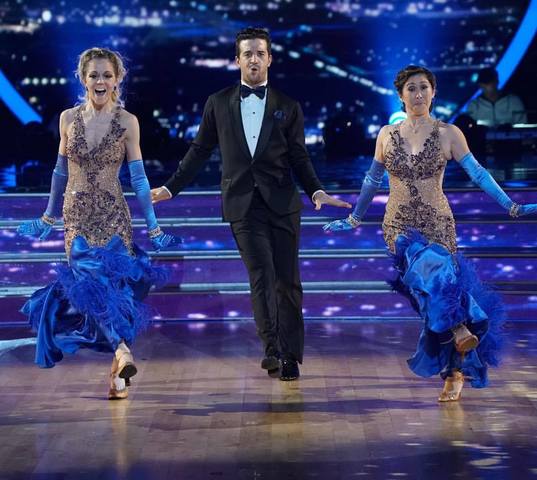 Lindsey Stirling's semi-final-worthy performance on Dancing with the Stars last night was golden, in more ways than one.

Stirling said she's been "a fan for a long time" of the ice skater and watched Yamaguchi perform in the Olympics, welcoming her and other former standout contestants on the show.

► You'll also like: After Displacing Rib, Lindsey Stirling Says Prayer Helped Her with 2 Epic Halloween Dances on "Dancing with the Stars"

It's happening! So jazzed to be working with @kristiyamaguchi.

As it turns out, she had nothing to worry about.

The trio performed a classic jazz number to "Let’s Face The Music And Dance,” earning 28 out of 30 points and high praise from judges.

"All three of you together, there was this incredible synergy. It was like I’d pay money to go see that dance. It was so fantastic: classic, clean, and spot-on," judge Carrie Ann Inaba said.

"Like the song says, ‘There may be trouble ahead,’ but on those two performances tonight you’ve got no trouble. That was terrific,” judge Len Goodman said.

"What has my life become," Stirling posted on Facebook after the show. "I don't think my internal smile could have beamed any brighter."

Though the performance was a smash, Stirling, who has shared her battle with anorexia before, opened up with Fox News about how she "shrunk" during her time on Dancing with the Stars.

"I dipped lower than I've been in a long time and I was like, 'That's not good,' because I was also gaining muscle and just losing so much fat," she told Fox News.

Stirling says she started to "eat in a smarter way," gaining back the weight she lost the first few weeks of the competition.

"Every time I would go to a fitting for those first couple of weeks, [the wardrobe people] would be like, 'Lindsey, you've shrunk again' and they would tighten the dresses but now I'm maintaining. I'm good," she adds.

Watch Stirling and Ballas take on the semi-finals of Dancing With the Stars on Monday, Nov. 13 at 7 p.m. MDT.