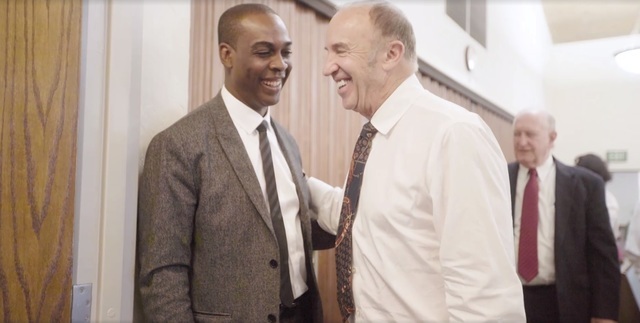 Listen: How Being Arrested, "Grounded for Life" Led One Teen to the Gospel

Donald Kelly's mother came to the United States with hope.

Hope for better education opportunities for her three children. Hope, as a single mother, to provide more for her family. Hope that her family could better themselves.

And she did everything to make sure that those hopes became realities for her family.

"My mom did everything to make sure that opportunity came true," Kelly, a Latter-day Saint bishop, says in an episode of the This Is the Gospel podcast. "She worked multiple jobs and, just I call it 'the hustle.' [She] hustled and did whatever she could to provide for us."

► You'll also like: Black Bishop Shares His Conversion and Experience with Unanswered Questions About Race and Priesthood

As the family of four from Jamaica settled into their new lives in Florida, Kelly says he knew his family wasn't well off but they always had food because of the hard work and sacrifice of his mother.

But the neighborhood they lived in was rough, and the friends Donald had in middle school were also a little rough around the edges.

One night, Donald and his three friends were hanging out, just being teenagers, when a neighbor thought they were trying to break into his house.

"He came outside and he chased us and I got caught," Kelly says. "I was arrested that evening. I wasn't taken to jail but I was booked and released back to my mom."

Kelly was put on house detention—not the kind that required an ankle tracking band, but it might as well have been because Kelly's mother, a strict Jamaican woman, pronounced him "grounded for life."

"That was my prison, was home," Kelly says with a chuckle.

However, this alone time gave Kelly time to think, and he began to feel that it was time to attend church, any church, with more regularity.

During this time, one of Kelly's friends introduced him to The Church of Jesus Christ of Latter-day Saints through an invitation to play basketball with the Scouts.

Though Kelly says he initially blew off the invitation, he eventually began attending church activities as his friend continued to invite him.

He says the first time he attended church was on Easter Sunday, which also happened to be general conference.

Afterward, "I had all these questions," Kelly says. "And he [my friend] says, 'I have two friends for you,' and introduced me to the missionaries."

Kelly began taking the discussions, but his mother was "stuck in her ways" he says and didn't join him. She had no problem with Kelly going to church, but when Kelly asked if he could be baptized, she told him he should wait until he was 18.

"Growing up in Jamaica, it's really interesting," Kelly says. "People don't get baptized until later. It's kind of like you're done making all the mistakes in life, your sinning."

Kelly was able to reach an agreement with his mother that he could be baptized when he turned 16. However, as a 15-year-old, he felt a strong desire to be baptized as soon as possible.

On a fast Sunday, Kelly and the young men in his ward decided to hold a special fast that Kelly's mother would allow him to be baptized before he was 16. The next time Kelly asked his mother if he could be baptized, she said yes.

"It was amazing," Kelly says. "And that gave me a huge, huge testimony of fasting. That if you have something, you bring it to the Lord."

Kelly was baptized soon after, but life as a black member in a predominately white ward presented its own challenges. And this experience of finding the gospel and developing a strong testimony of bringing our questions and concerns to the Lord would help prepare Kelly for what was to come.

Listen to the full podcast below to find out how Donald addressed these challenges as a new convert. For the full episode transcription, click here.