Listen: The Life-Changing Things These Men Did After a Father Was Killed in a Plane Crash

It was a typical California morning.

The sun was streaming in the windows. The late-summer air was just beginning to warm.

There was nothing to indicate that this would be one of the worst days of KC's and Brian's lives.

But that morning in 1983 was the morning that everything would change for the two boys and the rest of their family.

In the late '60s, Brian and KC's father, Ray, was stationed in the US while serving as a fighter pilot in the Vietnam War. Having been deployed for much of his 20s, Ray began asking his buddies where to find a good Latter-day Saint singles scene.

Ray Blake as a fighter pilot

"One of those was the Stanford singles ward in California," KC shares on an episode of This Is the Gospel. "So he flew out there one weekend and landed in Moffet field and went to an institute dance, and that's where he met my mom."

KC says his parents instantly hit it off, both knowing they had met "the love of their life" and were married a short time later.

After Ray retired from active duty, he and his wife, Diane, settled in California and began raising their family of three boys: Brian, KC, and Jeff.

Ray with his sons Brian, KC, and Jeff

However, times were tough in the flight industry. Ray was laid off from Pan America World Airways and began working different jobs, including a brief gig as a pilot for the Los Angeles Dodgers, to help make ends meet.

Eventually, Ray ended up working as a pilot for the commercial freight side of Transamerica Airlines.

Brian was 10, KC was 8, and Jeff was 4 the summer their father left for Angola, Africa, on a business trip for the airline.

"For some reason, I woke up that morning," Brian says. "I literally have it seared in my memory. . . . I remember him walking out the door and giving me a big hug and kiss and told me that he loved me." 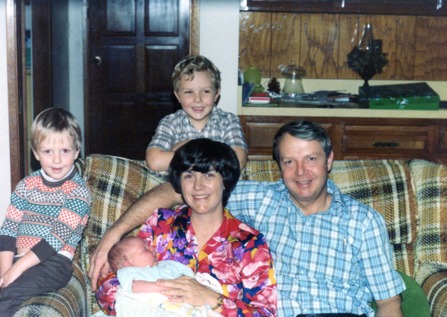 Ray with his wife and children

At the time, Angola was in the middle of a vicious civil war. Not long before, the entire crew of a Transamerica plane had been hijacked on a runway in Angola by rebels. For months, the crew was held hostage in the jungle until the rebels finally let them go.

On top of that, the flying conditions in Angola were extremely primitive. Dirt runways, prop planes, and air traffic control workers who did not speak English, the required language of aviation, were all the pilots had to work with.

Ray and Diane were well aware of the risks that came with the job.

"It was obviously a dangerous, dangerous job," Brian shares. "I knew my mom wasn't thrilled about it, but my dad, you know, was trying to provide for my family."

That's what made the late-night call from the airline so terrifying.

"My grandpa came down and woke up my mom and said, 'Diane, you have a call,'" Brian remembers. "So I went upstairs and listened, and she got a more and more concerned tone on the phone saying things like, 'You don't know where he is?' and 'When do you think you'll know something?'"

The answer to these questions came to the family on that bright California morning.

"I have a pretty vivid memory of that morning," KC says. "I remember . . . my mom waking me up and telling me my dad had been killed in a plane crash."

Listen to how KC's and Brian's ward members helped their family through this tragedy by listening to the episode below, or click here to read the full transcript.