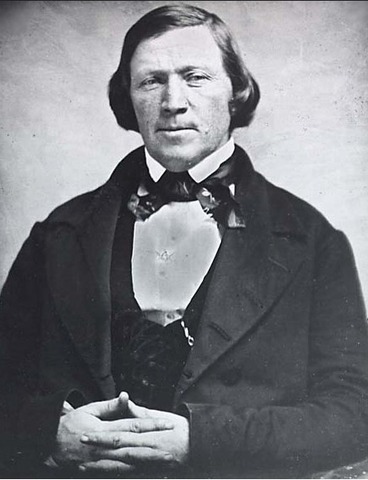 Purpose: To help family members learn that God chooses who will lead His Church

After the death of the Prophet Joseph, Sidney Rigdon believed that because he had been in the First Presidency, it was his right to be the next leader of the Church; he was able to convince some people to agree with him. As the president of the Quorum of the Twelve, Brigham Young told the apostles all that mattered was what the Lord wanted and they should seek out His guidance. At a meeting of the Church to settle the matter, both Sidney Rigdon and Brigham Young spoke to the congregation. While Brigham Young spoke, a miracle happened: he suddenly looked and sounded like Joseph Smith to those in the audience. More than one hundred people at the meeting had this spiritual confirmation of Brigham Young as the next leader of the Church and made record of it in their journals. Zina Huntington said of this experience: “President Young was speaking. It was the voice of Joseph Smith—not that of Brigham Young. His very person was changed. . . . I closed my eyes. I could have exclaimed, I know that is Joseph Smith’s voice! Yet I knew he had gone.” Wilford Woodruff declared, “If I had not seen him with my own eyes, there is no one that could have convinced me that it was not Joseph Smith speaking.” From 1844 to 1847, Brigham Young led the Church as the president of the Quorum of the Twelve Apostles. He was sustained as prophet while at Council Bluffs, Iowa, in December 1847.

1. Print a copy of the pdf here, “Brigham Young Appears to Be Like Joseph Smith.” Let family members create their own puppets. Take turns letting each retell the story in the lesson using his or her puppets.

2. Blindfold a family member and have him or her listen to voices of the other family members in the room (some may try to mask or disguise their voices; this is okay). See if the blindfolded person can guess who is speaking. Take turns letting other family members be blindfolded. Discuss how voices are often unique and that we can identify others by their voices. Note that this is what happened when Brigham Young both sounded and looked like Joseph Smith.

3. Discuss how the death of a prophet is now handled so that family members can understand policies and procedures associated with the order the Lord has established in His Church.

1. A picture puzzle coloring page was published on page 5 of the February 1993 Friend. This page also includes a list of important dates and events in Brigham Young’s life.