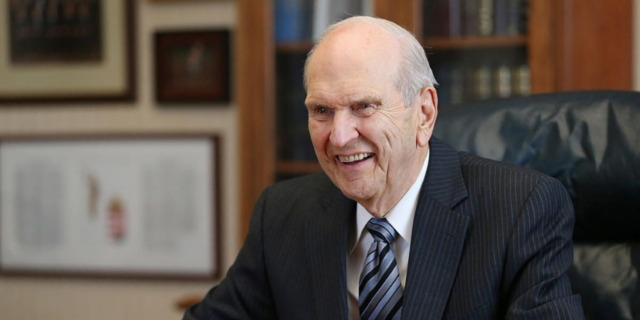 Living in the last days: What President Nelson taught 10 years ago that applies to us perfectly today

While serving as a General Authority Seventy, I had one of those unexpected teaching moments that life presents to us. This was when the financial crash was in full swing and our country was experiencing the most drastic drop in the economy since the Great Depression. Every day there were new announcements. The stock market crash. The collapse of the housing market. Major banks, mortgage companies, retirement funds, and investment houses were failing. There was talk of massive government bailouts. Unemployment was skyrocketing. A dark cloud had settled over the country and was spreading to other nations.

In the fall of 2007, my assignment as a General Authority Seventy was in Salt Lake City, working in the Church Office Building. One day I went down to a small cafeteria in the basement of the Church Administration Building that is reserved for General Authorities. After getting my food, I saw that four of my colleagues in the Seventy were seated at a table for six, just starting to eat. They invited me to join them. We spoke briefly about our various assignments, but soon the talk turned to the current financial crisis. It didn’t take long for our conversation to become quite bleak in tone. One of the brethren had a grandchild who had recently graduated with an MBA but was having no luck in finding employment. Another reported that a grandchild was unsure about wanting to get married and bring children into the world.

About that time, as this cloud of gloom settled over our lunch table, Russell M. Nelson, then Elder Nelson of the Twelve, came into the lunchroom with a tray of food. Seeing that we had a vacant spot at our table, he joined us. He ate quietly for a time as our conversation went right on in that same sense of discouragement. Finally, one of the brethren said, “They’re talking about the possibility of the whole government of the United States failing. Then what shall we do?”

Elder Nelson, who hadn’t said much since sitting down, laid down his fork and looked at us directly. His expression was very sober as he spoke quietly, saying something like this: “Brethren, the Lord chose the United States of America as the place for the Restoration of the gospel in our dispensation. He did that so we would have a base of religious freedom that would sustain the work of the Restoration. Also, the financial affluence and the political stability of the United States makes it possible for our Church to take the gospel to the world. That is a task that is not yet finished. Brethren, the Lord is at the helm. He will not let this work fail.”

That was more than ten years ago, but I still vividly remember two things. First, how sheepish we felt for letting ourselves become so negative. And the second was the lesson taught: God is in control. Why then do we fear? It was a profound teaching moment, and I have reminded myself of that day often when I have found myself growing discouraged and pessimistic. God is at the helm!

► You may also like: Are we experiencing signs of the Second Coming? Elder Gerald Lund weighs in with nearly 50 years of insights

“Why Are Ye Fearful, O Ye of Little Faith?”

President Nelson’s counsel that “God is at the helm” brings to mind a lesson taught by the Master. While crossing the Sea of Galilee one night, a violent storm descended. It must have been particularly dangerous, for these were fishermen who dealt with such storms all the time, but this one was violent enough that they were terrified. And, to their great dismay, Jesus slept through it all. Finally, they awakened Him: “Lord, save us: we perish.”

Sometimes that’s how we feel when the world rages around us and our lives rock back and forth so violently that we feel like we are going under. Surely there are people around the world with that experience during the COVID-19 crisis. But from the disciples’ experience on the Sea of Galilee there is a great lesson for us. Once awakened, Jesus looked at the storm raging around them and said unto them, “Why are ye fearful, O ye of little faith?” (Matthew 8:23–26). What happened next is the key teaching moment. “Then he arose, and rebuked the winds and the sea; and there was a great calm.” His disciples learned a great lesson that night, one that applies with equal power to us as we face the current and coming storms of life. “But the men marvelled, saying, What manner of man is this, that even the winds and the sea obey him?” (Matthew 8:26–27).

Living in the Last Days

So what does the future hold for those who are living in the last days of the world’s history? Since I wrote The Coming of the Lord those many years ago, questions about the future and what it holds for us have come up all the time. In recent years, with world conditions deteriorating at an ever-increasing pace, the questions are still with us. Many are deeply concerned. Many are anxious about current conditions and the future and what that means for them and their families. Here are a few of the questions I hear most frequently:

Question: Do you think the world today is more wicked than it has ever been?

Answer: No, not yet. There is a lot happening out there that is deeply troubling, but a look at history, both secular and scriptural, shows that there have been times when things were much, much worse. For example, think of the flood in the time of Noah. The Northern Kingdom grew so wicked in the time of Isaiah that the people were taken into captivity by the Assyrians and never returned. About a hundred years later, the Southern Kingdom of Judah suffered the same end, this time under the hands of Babylon. Lehi’s colony was warned in advance and fled, but the rest of the nation ceased to exist for a time. It happened yet a third time, with even greater fury, when the Holy Land was ravaged by the Romans and the Lord’s chosen people were scattered for almost two millennia.

We remember the Jaredites, a mighty civilization in the Americas, who came to their end in a prolonged war where they fought down to one last, single survivor. Mormon described the evil and depravity of his people in these words to his son, Moroni:

Many prisoners [were taken] . . . there were men, women, and children. And the husbands and fathers of those women and children they have slain; and they feed the women upon the flesh of their husbands, and the children upon the flesh of their fathers. . . . For behold, many of the daughters of the Lamanites have they taken prisoners; and after depriving them of that which was most dear and precious above all things, which is chastity and virtue . . . they did murder them in a most cruel manner, torturing their bodies even unto death; and after they have done this, they devour their flesh like unto wild beasts, because of the hardness of their hearts; and they do it for a token of bravery (Moroni 9:7–10).

Yes, we see much wickedness all around us. Yes, we have much to be concerned about. But, as a world, we have not yet reached those depths of iniquity and depravity.

Question: Is there anything to look forward to in the future?

Answer: Of course! The prophecies make it clear that humanity is not going to be extinguished in one last final conflagration as some in the world would have us believe. Nor will we somehow evolve until we spontaneously become the ideal society. But for all the gloomy outlook, some of the most exciting events in the history of the world are yet to come, including such things as the covenant gathering of millions upon millions of the house of Israel on both sides of the veil. There will be places of peace, refuge, and safety for the Saints of the most high in these terrible times. The city of New Jerusalem will be built in America. Ancient Israel will have its own homeland again and Jews from all over the world will continue to gather there. The lost tribes will return to their promised lands. There will be a great priesthood conference and sacrament meeting in the Valley of Adam-ondi-Ahman. And, greatest of all, the Son of Man will return in all of His glory, at which time the wicked will be thrown down, and a thousand years of peace and righteousness will come in.

How tragic that people of faith would be fearful of the future! Remember the Savior’s rebuke on the Sea of Galilee. Even though the disciples were career fishermen, the seas became so rough that they feared for their lives. I think it is safe to suppose that some things in the future (and even in the present) will be so rough that we too shall cry out, “Lord, save us! We perish.”

In their case, Jesus immediately calmed the seas. In our case, that may not always happen. But just as they found comfort in His words, let us take comfort in His numerous promises to us. For example:

That is a total of 149 admonitions from the Lord. Surely that should give us some inkling of how strongly the Lord feels about this. And that is not all.

Here are some promises from our modern-day prophets that should also bring us great comfort and hope:

Our Savior and Redeemer, Jesus Christ, will perform some of His mightiest works between now and when He comes again. We will see miraculous indications that God the Father and His Son, Jesus Christ, preside over this Church in majesty and glory. But in coming days, it will not be possible to survive spiritually without the guiding, directing, and comforting influence of the Holy Ghost. . . . I plead with you to increase your spiritual capacity to receive revelation (Russell M. Nelson, “Revelation for the Church, Revelation for Our Lives,” Ensign, May 2018).

A few weeks ago our youngest son and his wife and family stopped to see us. The first one out of the car was our two-year-old grandson. He came running to me. . . . He hugged my legs, and I looked down at that smiling face and those big, innocent eyes and thought, “What kind of a world awaits him?” . . . Everywhere we go fathers and mothers worry about the future of their children in this very troubled world. But then a feeling of assurance came over me. . . . The fear of the future was gone. That bright-eyed, little two-year-old can have a good life—a very good life—and so can his children and his grandchildren, even though they will live in a world where there is much of wickedness (Boyd K. Packer, “The Dawning of a Better Day,” Ensign, May 2004).

► You may also like: Elder Lund shares how the Lord reminded a widow that the veil is thin

Originally published in 1971, The Coming of the Lord, by Gerald N. Lund, became an instant bestseller and has remained continuously in print for nearly fifty years. Now this trusted resource has been fully updated and rewritten to reflect the latest prophetic teachings and a grow­ing sense of urgency as the Lord hastens His work. The Second Coming of the Lord is available now at DeseretBook.com.