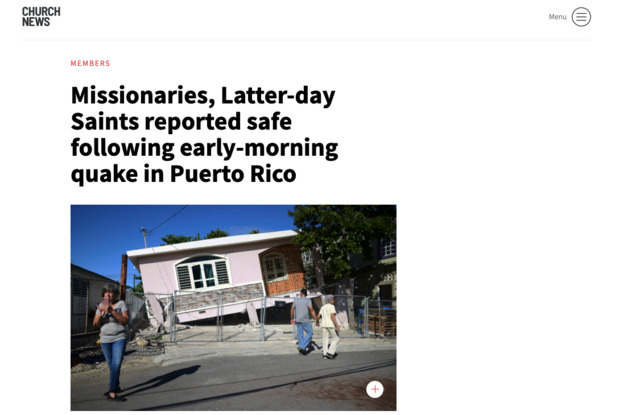 Following a 5.8 magnitude earthquake on Monday, civilians of Puerto Rico were jolted awake by an even greater earthquake measuring 6.4 on Tuesday morning.

According to Church News, “All missionaries serving in Puerto Rico are safe and accounted for and were in contact with their families Tuesday via phone texts.”

Church News spoke with Puerto Rico San Juan Mission President David Smart. President Smart said all the elders and sisters were “accounted for and in good condition and spirits.” Parents of those serving in Puerto Rico have also been contacted to assure them of the safety of the missionaries.

Members are also unharmed, as well as the missionaries serving in Puerto Rico. Ponce Puerto Rico Stake President Frank Ruiz was awoken by the tremors on Tuesday morning. After evacuating his own family, President Ruiz began to ensure the safety of members on the island.

“We have no reports of members being harmed or reports of their homes being seriously damaged,” President Ruiz told Church News. “We are still trying to account for everyone—but so far, things seem to be okay for the members.”

The city of Ponce in southern Puerto Rico was affected the most by the earthquake, and several people were injured. The capital of San Juan, an hour drive from Ponce, felt the earthquake tremors. Massive power outages resulted from the waves of tremors, but no other damage was reported.

San Juan Puerto Rico Stake President Wilfred Rosa reported that members in San Juan were frightened by the tremors but seem to be doing well. President Rosa and President Ruiz were in communication with each other and other stake presidents on the island right after the earthquake.

READ THE FULL STORY on TheChurchNews.com

Earthquake Puerto RicoEarthquake,Puerto Rico,
Comments and feedback can be sent to feedback@ldsliving.com