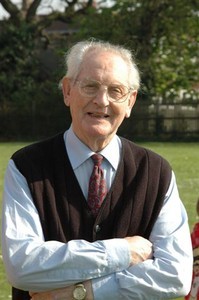 London: Never too old for Primary

At 90 years of age, and 60 years after joining the Church, Dougald McKeown has been called into Primary for the very first time.

In 2010, Brother McKeown was called to teach the 7-year-olds in the London North Ward, London England Hyde Park Stake.

"It was a surprise to be asked but I've never turned down a calling in six decades. I am just pleased to be there. Of course, at my age, I'm pleased to be anywhere!" quipped Brother McKeown, who is well-known for his wit and humour.

"More seriously, I still remember things I was taught when I was 7, even though that is now more than 83 years ago. I attended a church in Northern Ireland where I grew up and an old farmer told us stories from the Bible.