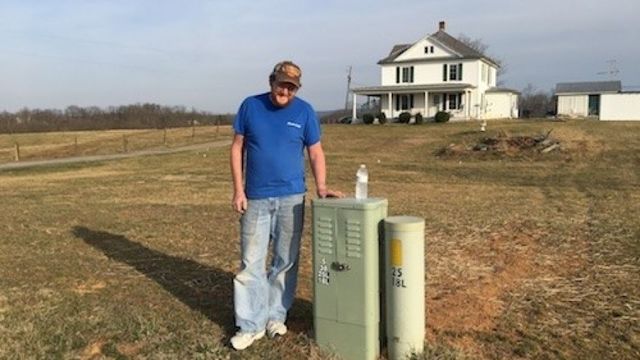 On July 28, 2016, Latter-day Saint Rosie Gagnon laced up her running shoes for her daily loop up and down the generous hills of Virginia’s Shenandoah County. The air was thick and soupy and the thermometer was begging for a break by mid-morning.

When Rosie hit mile six of eight, the water she’d packed along was gone and her face was bright red. As she passed by one particular home, a man pulling down the driveway stopped and poked his head out the window.

“It’s sure hot out here. Would you like a bottle of water?” He held it out for her. “I’ve got an extra.”

“Really?” Rosie was startled. Most of her interactions with motorists involve swearing, lectures, honking and a common one-fingered gesture that doesn’t usually accompany a smile and an attagirl.

But while the first lines of their story aren’t particularly remarkable, the next are extraordinary.

“My name is Bruce and I see you running almost every day. Would you like me to leave you a cold water bottle here on the phone post?”

Her jaw dropped. “You’d do that? Really?”

Yes, really. And the next day when Rosie hit mile six of eight, there was a cold bottle awaiting her on a green telephone box at the edge of the road.

The man, Bruce Riffey, continued the routine six days a week — Rosie doesn’t run on Sundays — through the rest of the summer and into the holiday season. On the days when he returned home from work and the bottle was still there, he simply returned it to his refrigerator, and put it back in place the next morning.

When Bruce noticed a man running alongside her on Saturdays, he left two bottles and eventually introduced himself to Rosie’s husband, Jason.

As a small thank you, the Gagnons left homemade bread, chocolates, and even a Christmas card in the same spot where the water waited each day.

“I just never expected this kindness. It floored me!” Rosie told me in a recent interview. “To remember to leave it every single morning? I mean it’s easy to be nice once, we all do that, but over and over every day in your routine? That’s pretty incredible.”

Rosie noted the perfect placement. She packs along her own water, of course, but it never lasts quite as long as she needs. But there, with a huge hill looming in her final stretch, she always knows there’s help ahead.

Rosie estimates her Good Samaritan friend has left over 100 bottles since that first muggy morning in July. But when reminded of this, Bruce smiled and deflected the attention. “It’s nothing, really. Sooner or later we all learn life isn’t about stuff. The best things we have are things we can’t pay for. And I’m just doing what my parents taught me. Giving a stranger a drink.”

Of course, Rosie disagrees. “It’s much more than that. Because of him, I push myself a little harder. I can go a little faster and a little farther because of that simple act of kindness.”

More than six months since that first bottle, the message is just as valuable as the water. Much like her eight-mile loop through the hills west of Woodstock, life has plenty of ups and downs. But when there’s kindness in your path, there’s hope that no hill is too steep.

“Hopefully,” Rosie said with a laugh, “we have many years of water-bottle friendship left in us.”

While Bruce will certainly continue downplaying the value of his daily acts of kindness, the rest of us won’t.

Sure, Rosie gets the water, but we all get the lesson.