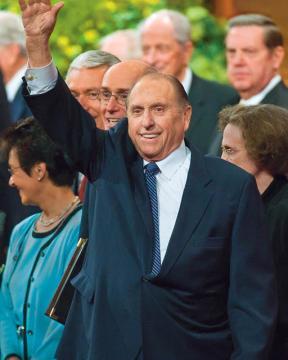 March 2011 Sharing Time—Prophets Now and Then

Preparation: Familiarize yourself with the prophets in this sharing time. Obtain pictures of each of them (Noah, Lehi, Daniel, Abinadi, Joseph Smith, Brigham Young, Lorenzo Snow, and Thomas S. Monson.) Divide the board at the front of the room in half by drawing a line down the middle. On one side write “Scriptures” on the other side write “Latter-day.”

Presentation: Tell the children that you are going to learn about some prophets. Some are from the scriptures and some are latter-day prophets. Explain that you are going to give them some clues. When they think they know who it is, they should quietly raise their hand (do not shout out the answer). Continue to give all the clues, then call on someone with their hand up to guess who it is. If they are not correct, ask for other answers. If none of the children know who it is, tell them the answer. Show the picture to the children.

After they have discovered who the prophet is, ask them if he was a prophet in the scriptures or in the latter-days (since the restoration of the gospel). Post the picture on the correct side of the board.

Repeat with the other clues and pictures.

Noah (see Genesis 6–8):
1. He held the priesthood.
2. Most people on the earth were wicked, but he and his sons were righteous.
3. He told the people to repent, or the Lord would destroy the earth.
4. He built a ship for his family and each kind of animal on the earth.
5. He and his family were safe in the ship when it rained for forty days and the earth was flooded.
6. He saw a rainbow as a sign from the Lord that the world would never be destroyed by flood again.

Lehi (see 1 Nephi 1–16):
1. He lived in Jerusalem.
2. He had a vision and taught his family the things the Lord wanted them to do. He told the people to repent or Jerusalem would be destroyed.
3. He had a son who also became a prophet.
4. He took his family out of Jerusalem into the wilderness where they lived in a tent. He found a curious ball that showed them the way to go, called the Liahona
5. He knew the scriptures were important and sent his sons back for them.
6. He and his family came to the American continent by boat.

Lorenzo Snow (see Susan Arrington Madsen, "Lorenzo Snow and the Sacred Vision", Friend, Aug. 1993, 14 and Presidents of the Church Institute Student Manual):
1. He served missions to Ohio, England, Italy, Hawaii, and to the Indians in the northwestern United States.
2. He almost drowned in Hawaii.
3. He helped settle Brigham City, Utah.
4. He was president of the Salt Lake Temple.
5. He visited St. George and taught the people to pay their tithing.
6. While in the Salt Lake Temple, he was visited by Jesus Christ.

Brigham Young (see lds.org/newsroom):
1. He was a carpenter.
2. As a child he had to help support his family and only went to school for 11 days.
3. He studied the Book of Mormon for 2 years before joining the Church.
4. He led the pioneers to Utah. He assigned people to create hundreds of cities in Utah, Idaho, Arizona, and other western states as well as Mexico and Canada.
5. He was the territorial governor of Utah.
6. He told the people where the Salt Lake Temple should be built.

Daniel (see Daniel 6):
1. He taught that Jesus Christ would come to live on the earth.
2. He could interpret dreams.
3. He and his friends were taken to live in the king’s court.
4. He chose to eat nutritious food instead of the rich food and alcohol the king’s servants gave him.
5. He continued to pray to Heavenly Father after it was made illegal. He was thrown into a den of lions as punishment.
6. The Lord saved him from the lions.

Thomas S. Monson﻿ (see lds.org/newsroom):﻿
1. He grew up in Salt Lake City.
2. He was in the Navy.
3. He became a bishop when he was 22 years old. He learned that we should take care of each other.
4. He was president of the Canadian Mission.
5. He loves Boy Scout activities and is on the National Boy Scouts of America board.
6. He is the current president of the Church.

Abinadi (see Mosiah 11–15):
1. He lived about 150 BC.
2. He taught about the coming of Jesus Christ.
3. He visited wicked King Noah and his court.
4. He told them to repent.
5. He was told to deny his words or he would die. He didn’t take back his teachings and was killed by fire.
6. One person (named Alma) heard his teachings and believed.

Joseph Smith (see Joseph Smith–History and lds.org/topics):
1. He lived with his parents and brothers and sisters. He was taught to read the scriptures and pray.
2. He lived in New York state.
3. He prayed to know which church to join.
4. Heavenly Father and Jesus Christ visited him in a grove of trees.
5. He was told to translate the gold plates into the Book of Mormon.
6. He restored the Church. He wrote the Articles of Faith.

Bear testimony that the prophets of old as well as the prophets now help us know what Heavenly Father wants us to do. We can know their teachings by reading the scriptures and listening to general conference.