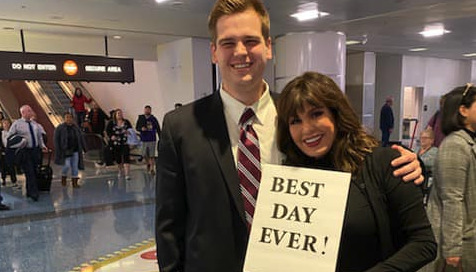 Marie Osmond is not only known worldwide for her musical talent but is also known for her faith as a member of The Church of Jesus Christ Latter-day Saints. Osmond shares a special “Sunday Message” every week on her Facebook page that shares a portion of her beliefs.

This past week, Osmond’s “Sunday Message” was a letter addressed to her son. Osmond’s son, Matthew, returned home from his mission on New Year’s Day. Matthew served the people of Michigan for the duration of his mission .

The letter begins by Osmond expressing the joy that she felt when she saw her son for the first time in two years and the transformation of her son from a boy to a man. Osmond continues that she is proud of her son for setting aside time to “serve other people and most importantly, develop a deeper relationship with [his] Savior.”

Matthew returned home from his mission and two days later left for college. Although Matthew’s time home was short lived, Osmond does not express any sadness—only enthusiasm for what is to come. Osmond speaks about how hearing the mission stories of her son inspire her to want to be a better person. She believes that we are all on a mission to help each other.

“We are our Savior’s hands and He wants us to help each other,” Osmond writes. “The Savior said, ‘By this shall all men know that ye are my disciples, if ye have love one to another’ (John 13:35).”

She then references a quote by President Russell M. Nelson that urges all of us to lend service to any who have lost their way.

Osmond encourages her son and readers to emulate Heavenly Father and Jesus Christ by serving others and being selfless.

She concludes the letter with a quote that she believes to be the best way to live: “Live your life in such a way that people who know you, but don’t know Christ, will want to know Christ because they know you.”