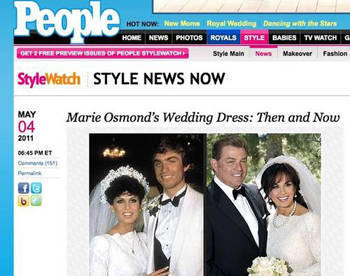 Apparently, Marie Osmond’s first husband never got over her.

“He got all the kids around, got on his knee and said he always loved me,” Osmond said in an ABC TV report. “You know he never remarried. I’m just a tough habit to break.”

Osmond, 51, remarried her first husband, Stephen Craig, 54, last week in the Las Vegas Nevada Temple. Many media outlets reported similar details regarding the special day. Osmond also wore the same white wedding dress she wore for their original marriage in 1982, as shown in these photos on People magazine's website.