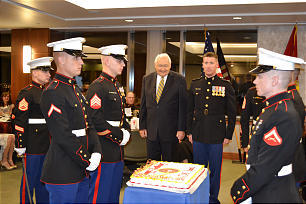 Elder Perry of the Quorum of the Twelve and his wife, Sister Barbara D. Perry, were honored guests at the 238th Marine Corps Birthday Ball, hosted by Fox Company, 2nd Battalion, 23rd Marines.

“I would like to say I have always been proud of the time I served in the Marine Corps,” Elder Perry said in remarks at the event.