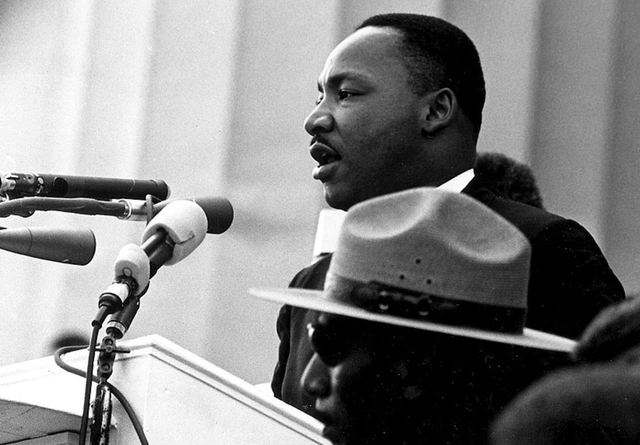 Dr. King is quoted as saying, “Life’s most persistent and urgent question is: ‘What are you doing for others?’” Each year, many Americans—and Latter-day Saints—honor Martin Luther King, Jr. and his legacy of service. What are you doing this year to honor Dr. King's legacy and how are you serving others?

If you're not sure, don't worry. You can start by checking out these five interesting facts you might not have known about the King family and The Church of Jesus Christ of Latter-day Saints.

1. Two copies of the Book of Mormon were found in Martin Luther King, Jr.’s personal library when his house was sold in 1990.

While we couldn’t find any particular instance of him quoting from the Book of Mormon, we hope he was as inspired by the words therein as we are!

2. Dr. King once spoke at the University of Utah.

He addressed a standing-room-only crowd of 1,700 people—including many Latter-day Saints—and encouraged those listening to join the civil rights movement. As part of his address, he said: "We are standing on the threshold of the greatest period of racial development. The most important force behind the struggle . . . is the nonviolent resistance movement. It's our most potent weapon." His speech ended to a standing ovation.

Dr. King's moving rhetoric has occasionally been used to help teach Latter-day Saints about the importance of freedom, turning the other cheek, practicing compassion, and treating our fellow man with love and respect. One of our favorite Dr. King quotes used in a talk by Elder Jeffrey R. Holland is:

“When our days become dreary with low hovering clouds and our nights become darker than a thousand midnights, let us remember that … [God] is able to make a way out of no way, and transform dark yesterdays into bright tomorrows.”

4. In 2013, James Taylor joined with the Tabernacle Choir to sing a musical tribute to Martin Luther King, Jr.

While the entire concert was not focused on Martin Luther King, Jr., the song “Shed a Little Light” was written for and dedicated to him. Ruth Stevenson, a member of the Tabernacle Choir, said, “This musical tribute to Dr. Martin Luther King will always be a timely message.”

At the symposium, Martin Luther King III was presented with a Church-compiled, four-generation family genealogy. Hundreds of non-Latter-day Saint genealogy enthusiasts were in attendance at the symposium, where it was announced that the Church was joining forces with the National Archives at Atlanta to increase the tools available to African Americas to research their family history. These efforts included digitizing World War II draft cards and thousands of slave manifests from the 1700s and 1800s.