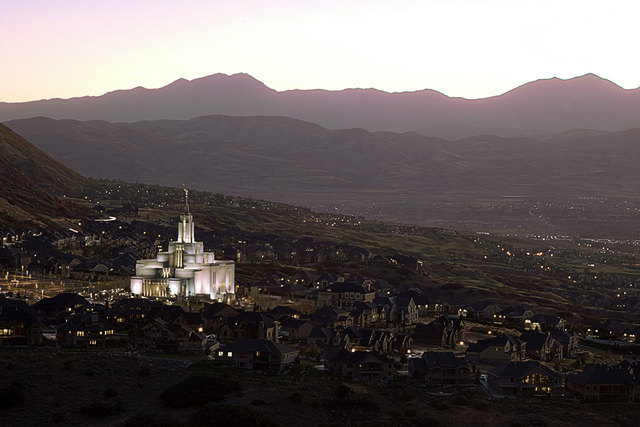 The following is a story that Sister Bonnie L. Oscarson shared in the Sunday morning session of General Conference:

"On March 30, just one year ago, little two-year-old Ethan Carnesecca, from American Fork, Utah, was admitted to the hospital with pneumonia and fluid around his lungs. Two days later, his condition had become so serious that he needed to be flown by helicopter to Primary Children’s Hospital in Salt Lake City. His worried mother, Michele, was allowed to ride in the front seat and accompany her son. She was given a headset so she could communicate with the others in the helicopter. She could hear the medics working on her sick little boy, and being a pediatric nurse herself, Michele knew enough to understand that Ethan was in serious trouble.

In this critical moment, Michele noticed they were flying directly over the Draper Utah Temple. From the air, she looked out across the valley and could also see the Jordan River Temple, the Oquirrh Mountain Temple, and even the Salt Lake Temple in the distance. The thought came into her mind: “Do you believe it or not?”

She says of this experience:

“I had learned about the blessings of the temple and [that] ‘families are forever’ in Primary and in Young Women. I shared the message on families to the good people of Mexico on my mission. I was sealed to my eternal companion for time and all eternity in the temple. I taught lessons about families as a Young Women leader, and I shared stories about forever families with my children in family home evening. I KNEW it, but did I BELIEVE it? My answer came as quickly as the question popped into my head: the Spirit confirmed to my heart and mind the answer I already knew—I DID believe it!

Ethan spent many weeks in the hospital, receiving expert medical care. The prayers, fasting, and faith of loved ones, combined with that care, allowed him to leave the hospital and return home to be with his family. He is healthy and well today."